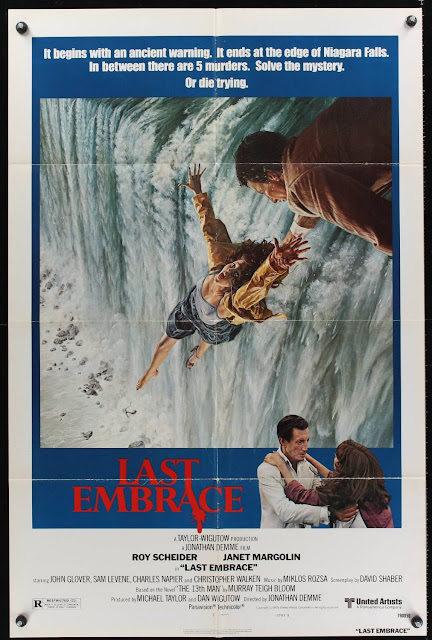 On the other side of the trellis, it’s Burl, here with a review of what I’ve always thought of as a sort of lost-in-the-shuffle Jonathan Demme picture, Last Embrace! I guess it was a transitional picture for him, or anyway the last one before his real transitional picture, Melvin and Howard!
It’s a Hitchcock homage from the get-go, though for a good stretch it feels more like one of those paranoia thrillers from the 70s, like The Parallax View or The Conversation or Three Days of the Condor! But it soon enough settles back into Hitchcock, Junior Variety; and I must stress to you that ha ha, that is not meant as a pejorative, necessarily! Hitch himself made a few Junior Hitchcock pictures, like Psycho, which is at the same time his best, if you ask ol’ Burl!
It’s Roy Scheider time again, that good beefjerky of an actor whom we know from Jaws, Sorcerer and of course Night Game, by which time, a decade after this one, he’d somehow become less leathery rather than more! Here he plays Harry Hannan, some kind of agent for some kind of spying organization! At the beginning, apparently off the clock, he’s enjoying a tasty meal with his lady wife, when in comes a motley crew that includes Joe Spinell from Deadly Illusion and Jim McBride, the director of Hot Times! Shifty looks are exchanged, guns are pulled and in the ensuing fracas, Scheider’s wife is killed!
Well, he goes straight to a Center For Extreme Nervousness, where an always smiling doctor played by Jacqueline “Ghost Story” Brooks takes care of him for, presumably, a good number of months! He’s still pretty punchy when they release him though, and immediately gets the idea someone is trying to retire him permanently! Ha ha, not even Mandy “Princess Bride” Patinkin is above suspicion! And here comes some early quirk from Christopher Walken, playing the mustachioed agency boss whose office is behind a secret door, and whose every word and mannerism paints him as a more likely suspect!
Well, Scheider really gets discombobulated when he finds a mousy, pet-loving lady living in his apartment! It’s Janet Margolin from Annie Hall, and quite a bit of footage is devoted to Scheider’s initially antagonistic, soon-enough-romantic relationship with this lady! The Herrmann-like score from accomplished veteran Miklos Rosza, who was having a last burst of career business around this time, informs us that this romance is not likely to end happily! Ha ha!
When he’s not suffering nightmares or pulling fits, Scheider is trying to figure out who sent him the mystery note in ancient Hebrew, the very note that has served as a death notice for at least five other men in recent days! He gets help from an old boy named Sam Urdall, played by Sam “God Told Me To” Levene, and several rabbis, including one played by the mayor from Ghostbusters, David Margulies! Meanwhile, Charles Napier gets bell-tower fever, John Glover from Gremlins 2 wanders around as a drippy-nosed academic, and it all turns out to be because… well, I’ll let you find out for yourself, ha ha!
There is a point, entering into the third act, where you may believe you’ve accidentally changed to a different movie, but don’t worry! You haven’t! It’s just the big reveal, and it lets you know what’s going on without yet telling you why; and that of course is the true mystery! I’m just glad that I'm good at letting myself remain ignorant of twists before they occur, even if they’re fairly obvious!
Compellingly enough, Last Embrace might be classed as a Jewish thriller, and is therefore elementally different from the more Catholic thrillers of Hitch! And yet of course it’s ultimately a Hitchcock tribute, but in some senses rather a slapdash one! Demme is a talented director, certainly, but here he’s mainly trying out a bunch of tricks, some of which work and some of which fall flat! (To his credit, Demme doesn’t just repeat the same Hitch tricks everyone else does, like the dolly in/zoom out or the dolly-around! Ha ha, looking at you Spielberg and De Palma!) The climax involves a plodding, slow-motion chase and a final adventure that aims for North By Northwest, but falls a little south of that, ha ha! Nevertheless it’s an entertaining thriller with good performances and an unusual, if unpersuasive, story! I’m going to give Last Embrace two grumbling refrigerators!
Posted by Burl at 13:12