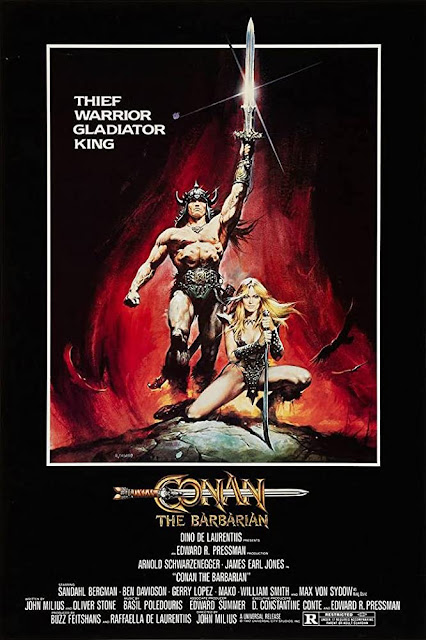 Ha ha, Burl, what is best in life? To crush bad movies, see them driven before you, and to hear the lamentations of their directors! Ha ha! No, that’s not my remit at all - I was just expressing the quasi-fascist ideal found in John Milius’s Conan the Barbarian! In fact, my own philosophy is quite different, but if you’re a regular reader of my notices, you are surely well aware of my gentle and pacific nature! Ha ha, Burl laughs not just at your Four Winds, but also at your Nietzschean Super-Man!

Of course this picture came out in that magical summer of 1982, along with The Thing, Blade Runner, Poltergeist, The Road Warrior, E.T., Star Trek II, and probably some others! For that reason it might be held in slightly higher regard than it might be otherwise, but it’s still a pretty solid action fantasy! It’s an origin story, following Conan from his youth, when his parents are killed and his village destroyed by a cult leader, Thulsa Doom, played by James Earl Jones in a beadless Donna Summer wig; through his kidnapping and maturation on the Wheel of Pain; his pitfighting and poetry-reading years; and finally the gathering up of his pals and his quest for revenge!

Conan and his friends jog across the countryside, through desert, steppe and thundering beach, with the cry of the loon accompanying them everywhere they go! There’s a marvelous heist scene featuring a giant snake, and later the mission gains some focus when a grizzled old king played by Max Von Sydow from Strange Brew and The Magician tasks Conan and his pals with the job of rescuing his daughter from the cult! Of course Conan is made to do some contemplation on the Tree of Woe, but there are some battles and finally a Wagnerian scene on the steps, complete with a head-chopping!

There’s a pretty good gallery of faces in this picture! In addition to those named, we get Mako from Armed Response and The Killer Elite playing a twitchy stilt-house wizard who becomes Conan’s pal and chronicler, and serves as the film’s narrator! William Smith from Fast Company and Maniac Cop does a terrific job in the part of Conan’s dad, and husky Sven-Ole Thorson, looking like a lost member of Spinal Tap, is Thulsa Doom’s hammer-wielding henchman!

I’ve never considered it a great action picture, though! It’s more like an opera stripped of its singing (though it has a terrific score from Basil Polidouris), with some thundering hoofbeats and clanging swords added in for spice! But while it does a fair-to-good job of translating the Conan mythos to the screen, it’s rarely exciting to watch! It’s good solid Hollywood comfort food, if frequently goofy and a bit on the reactionary side! I give Conan the Barbarian two and a half straightened snakes!