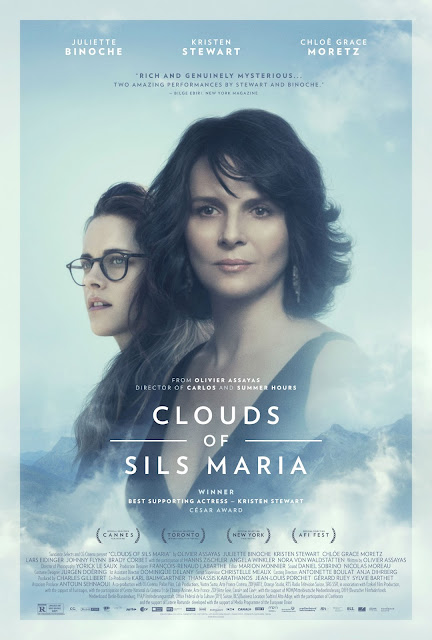 Eh bien, ha ha, c’est Burl! I’m here with a recent French picture, Clouds of Sils Maria, which comes from Olivier Assayas, the fellow who brought us Irma Vep! I really should watch Irma Vep again one of these days – I had a fine time seeing this one by myself in the movie house when it was released those many years ago, then walking home in the rain humming “Bonnie & Clyde” to myself the whole way! Ha ha, memories!
But it’s Clouds of Sils Maria I’m here to talk about today, and this picture is something of an echo of that earlier Assayas joint! Juliette “Godzilla” Binoche, who apparently provided the original idea for the picture, stars as an aging superstar actress taking part in a tribute to the writer of Maloja Snake, a play about the romantic power dynamics between an older and a younger woman! This is the play that made Binoche’s character a star many years earlier when she played the ingénue role! Ha ha!
But things have changed and continue to quickly change! The venerated playwright kicks the bucket, the tribute becomes a memorial, and Maria, our older actress, is offered the older-lady role in a new production of Maloja Snake! She holes up in the stunning mountaintop aerie owned by the late playwright and begins running lines with her personal assistant Val, played by Kristin Stewart of American Ultra! Of course the relationship between Maria and Val mixes and blurs with that of the characters they’re reading, and this is further complicated by the troubled young starlet, played by Chloe Grace-Moritz, who is cast in the younger role!
So you can see there are a lot of games going on in the situations and even in the casting, ha ha! Some of them work and others fall flat, or are a bit too obvious, but one gets caught up in the scenario nonetheless! Of course aging and the perceptions that come with it are major themes, and one offshoot of this is the curiously hefty amount of screen time given to scenes of Val trying to convince Maria that blockbuster Hollywood pictures can contain the same thematic and emotional weight as any rarified art film or theatre play! Ha ha, and I guess this is what leads to a mysterious disappearance late in the picture!
The phenomenon alluded to in the titles of both the film and the play-within-the-film provides one of the picture’s strongest moments! The Maloja Snake is a ribbon of low-drifting cloud that winds its way through the mountains near the playwright’s lovely home, and though the characters don’t see it, we do, and it’s a pretty good trick effect too, I must say!
The movie has a few longeurs, and I can’t say I wanted these characters as my new best friends, but the picture is engaging and the acting strong! It also appears to have been shot on film (by Yorick Le Saux, who also shot Only Lovers Left Alive), and it looks great! It’s of course a picture in the tradition of Persona and Cries and Whispers, but I don’t think it quite rises to the level of those marvelous classics, its high-altitude location notwithstanding! Ha ha, I’m going to give Clouds of Sils Maria two and a half pairs of granny panties!
Posted by Burl at 23:35