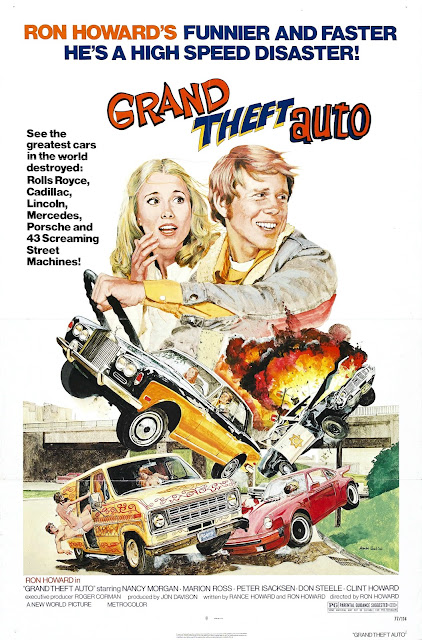 Vroom, vroom, eerrrrkkkk! Ha ha, that’s ol’ Burl burning out with a good old-fashioned car crash picture for you! Well, we all know the story: Ron Howard, the well-known ginger who would later direct pictures like Apollo 13, was, back in 1976, only an aspiring film director, and he asked Roger Corman if he could direct a movie for Corman’s company New World Pictures! “Ha ha,” Corman told him, “you sure can, just as long as you’ll first star in an item called Eat My Dust!” Well, Howard said yes to that, and then the next thing you know he was co-writing (with his dad Rance), starring in, and directing a movie called Grand Theft Auto!

When I was maybe eight or nine I’d have told you this was my favourite movie! It was on TV regularly I guess, and I sure did love all the car crashes, ha ha! But some time during that period my family happened to be hosting a bunch of people we barely knew, who’d been displaced because of a forest fire in their little town; and one evening they proposed going to a movie, Being There, and invited me along! I was torn because Grand Theft Auto was on TV that night! But ultimately I opted for Being There, and I think that experience might have been profoundly formative: an introduction to a level of movie quality of which I’d been previously unaware!

I still appreciated Grand Theft Auto, though, and liked it again when I re-watched it the other day with my son, who's at the perfect age for Grand Theft Auto appreciation! It tells the tale of a young couple, Sam, played by the young Howard, and Paula, played by Nancy Morgan from The Nest! This doesn’t sit well with her richie-rich parents, who want her to marry a wealthy dork called Collins Hedgeworth, a role essayed by Paul Linke! He of course is well known from Moving Violation, Motel Hell, and his many appearances on CHiPs! Paula’s parents are played by Barry Cahill from The Groundstar Conspiracy, as her blowhard dad Bigby; and Elizabeth Rogers, who’d been involved in this sort of vehicular nonsense before in The Van, plays her mother!

Now one of the best moves Howard made, and probably one of the reasons I was so taken with it as an eight year-old, is that the action in this picture starts right from the get-go! There’s a short argument scene with the parents, then the girl steals her father’s Rolls Royce and it’s off to the races without a whole bunch of needless blah blah blah! I felt the same thing about that other big 1977 release, Star Wars – ha ha, I thought to myself, finally a movie that starts at the beginning! And as for Grand Theft Auto, except for a pointless argument scene between Sam and Paula late in the picture, it doesn’t let up ‘til the end!

Boy, they sure crashed a lot of cars in this picture! It’s pretty impressive on a Roger Corman budget, I must say! Paula and Sam (who spends most of the movie in the passenger seat, presumably to make it easier for him also to direct the movie) point the Rolls toward Las Vegas in a bid to secure a quickie wedding, and immediately become folk heroes thanks to the interest in their case taken by radio DJ Curly Q. Brown, played of course by The Real Don Steele, whose voice we know from his vocal appearances as Screamin’ Steve Stevens in Rock n’ Roll High School and Rockin’ Ricky Rialto in Gremlins! They’re also being chased by an ever-increasing number of people including but not limited to Paula’s parents; a bunch of private eyes or something in their employ; Collins Hedgeworth of course, and, separately, his mother (played by Mrs. Cunningham, natch); a pair of fortune-hunting mechanics; and police! Also worked in there is the requisite and always welcome Paul Bartel cameo!

It’s a pretty auspicious directorial debut, ha ha! There are crack-ups aplenty and the pace is good and quick! The story doesn’t amount to much, and the intra-lovebird conflict is highly manufactured and annoying, and Dick Miller should be in here somewhere but mysteriously isn’t; yet it’s nevertheless a breezy and entertaining little picture! And of course I feel a lot of residual affection from my prepubescent ardour for the movie, and, strangely, gratitude too, for I associate it with my viewing of Being There and subsequent entry into a wider world of movie appreciation! Grand Theft Auto, in this view, was not just something I appreciated, but something I had to overcome before becoming able to broaden my world! I still like the picture though, ha ha, and I give it three homemade lovewagons!