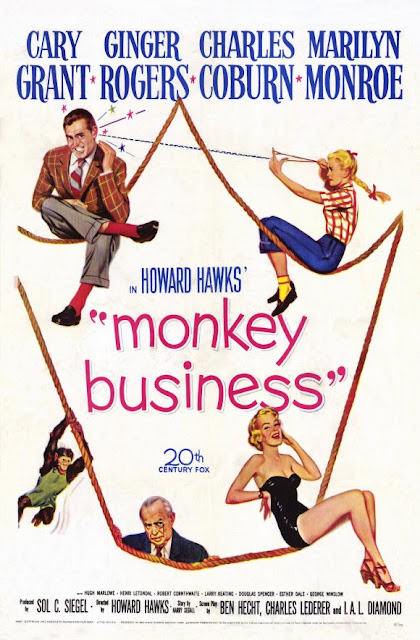 Chee chee chee everybody, it’s Burl, here with a review of monkey madness! Ha ha, yes, it’s a 1950s picture featuring a chimpanzee, but no, it’s not Bedtime for Bonzo! In fact it’s a Howard Hawks movie, but not one of his great classics like Twentieth Century or Rio Bravo! No, this one is called Monkey Business!

If you’ve seen Bringing Up Baby, you might wonder to yourself if this is Hawks taking that story for another go ‘round the block! Well, it is similar, being as it also has Cary Grant from North By Northwest playing a scientist, who here is named Dr. Barnaby Fulton instead of Dr. David Huxley; and the key animal in the film is a chimp rather than a leopard! Altogether they’re similar enough to make a good double feature, and different enough to not feel you’re repeating yourself if you do program such a double header!

Grant’s scientist is very much of the absent-minded variety here, and Ginger Rogers from Top Hat is his patient wife Edwina! Grant runs a team of scientists at Oxly Chemicals, run by Charles Coburn from Heaven Can Wait in the role of Mr. Oxley, and the project he’s trying to work out is a sort of a youth formula! Marilyn Monroe from Niagara is the beauteous Oxly Chemical secretary Miss Lois; Hugh Marlowe from The Day the Earth Stood Still is a sort of frenemy of Grant’s, and is Rogers’s old flame; and Robert Cornthwaite from The War of the Worlds is one of the scientists! There are also wee cameo appearances by Harry Carey Jr. from Gremlins and Dabbs Greer from Con Air!

What happens is this: Grant has been having trouble perfecting his mixture, and this is greatly increasing his neglect of every other element of his life! After another failure, it’s left to one of the laboratory chimps to bust out of her cage and start mixing with the vials and the beakers and the tubes, and doing a really terrific job of it! Ha ha, it’s some of the best chimp acting I’ve seen, and they’re always very  impressive performers! Of course, it’s hard to push away the idea that they shouldn’t be performing at all, but to whatever extent you can, you’ll be charmed by this smilin’ simian!

And the chimp’s mixture is just right: she doses the lab’s water cooler, and whoever drinks from it first complains of a bitter taste and then regresses, mentally and emotionally at least, to some earlier age! We get to see Cary as an insouciant twenty year-old and later as a pretty aggressive eight year-old! And Rogers follows suit, ha ha, and later, after he does the fish-in-your-pants dance, old Coburn too begins to act like a kid, along with all the scientists! Ha ha! I have to applaud all the acting in this picture: everyone is really good at acting younger! It’s multilevel thespianship, and I dug it!

The movie really is much a series of these instances of regression, but that’s not a bad thing! It opens with some amusing credits (“Not yet, Cary!”) and then a long, single-location dialogue scene, like a Tarantino movie often has, with some nice innuendo salted in, and then the chimp gets to work; and after a series of embarrassing regressions, the remaining mixture is poured down the sink, and fini! It’s a pretty basic story after initially seeming complicated, and it does often get very funny! There’s a long cowboys-and-Indians scene that had me cringing, me with my modern thinking, ha ha! That went on for quite a while, but it did have a punchline!

Again I must laud the performing, and by extension Hawks! Ha ha, and don’t believe the DVD cover when it tells you this is a Marilyn Monroe picture! She’s in it, but doesn’t get much more to do than show off her gams and ride around in a car! An opportunity missed there, but ha ha, that’s hindsight for you! I give Monkey Business two and a half becoming chimp smiles!