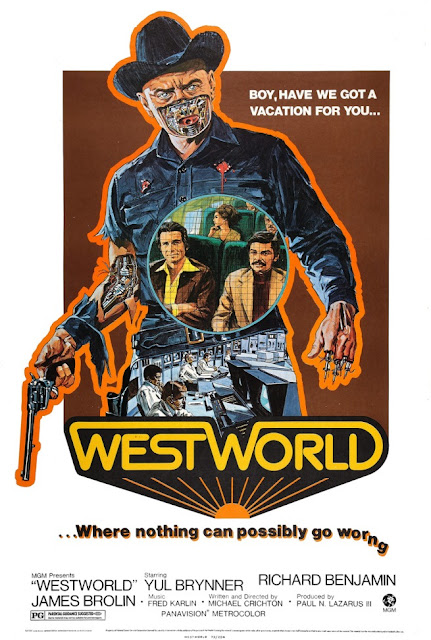 Beep-boop-blorrrrttt, it’s Burl, here with a tale of fatal malfunction! Yes, I’m talking robots, and how many times in movies have we seen them get their wires crossed and go on a rampage? Plenty, I think! But today’s picture is one of the granddaddies of the malfunctioning robot subgenre, and I think you’ll agree when you hear the movie’s name: Westworld!

It’s the story of the world’s most unlikely theme park, or anyway the most unlikely one until its writer/director, Michael Crichton, came up with Jurassic Park! Ha ha, Crichton was a funny guy - a doctor who became a novelist of medical thrillers, who became a filmmaker of medical and sci-fi thrillers, who became a novelist again, and then became a crank who claimed climate change was some kind of big conspiracy! Then he died, and all of these things he accomplished while being very tall!

Westworld was his first picture as a director, and you can kind of tell! The picture is structured oddly and peopled very sparsely - we have our two heroes, played by Richard Benjamin, who was in The Last Married Couple in America and then became a director and made movies like The Money Pit, and James Brolin from Von Ryan’s Express and The Car; and then the main robot villain, essayed by Yul Brynner from The Magnificent Seven and The Ultimate Warrior; and then everyone else is pretty much window dressing!

The window dressing includes fellow Westworld guests Norman Bartold from Moving Violation and Dick Van Patten from Lunch Wagon, and Alan Oppenheimer from The Groundstar Conspiracy as the chief scientist in charge! In charge of what, you may be asking, if you’ve never seen or heard of the picture! Well, it’s an amusement park filled with robots, where nothing can possibly go worng! There are three components: an Old West one, where we spend most of our time; a Medieval one; and a Ancient Rome one, which mainly seems to cater to the more sexually-inclined guests!

But of course things do go worng, and all the guests and technicians get slaughtered, and pretty soon it’s just Benjamin and Brynner playing six guns across the park! Ha ha, and can we talk about how implausible this park is? For example, everyone in Westworld, both human and robot, carries a real gun! And even though there’s supposed to be a device on the guns that makes it impossible to shoot a warm-blooded entity, that seems an imperfect safety device to say the least, and in any case it’s forgotten about when Brynner starts a-blastin’! And honestly, who really wants an authentic Old West experience? I spend lots of time being grateful I wasn’t around in that era!

It’s a clunky story made inexpertly, but it’s still an enjoyable picture! It’s always seemed a picture that might benefit from a remake, being as it has a pretty zippy premise! I know there was a sequel, Futureworld, and I’ve heard tell of a TV series from a few years back, but I haven’t seen any of those! And I guess there’ve been plenty of other berserk-bot pictures, so maybe my remake idea’s not so hot after all! No, let’s have an original story about berserk-bots, please!

It’s wafer thin and easily forgotten once terminated, but it has enough pleasures - the premise, the dweeby charms of Benjamin, Brynner’s proto-Terminator determination - to warrant some attention! Ha ha, I give Westworld two shots of bourbon!