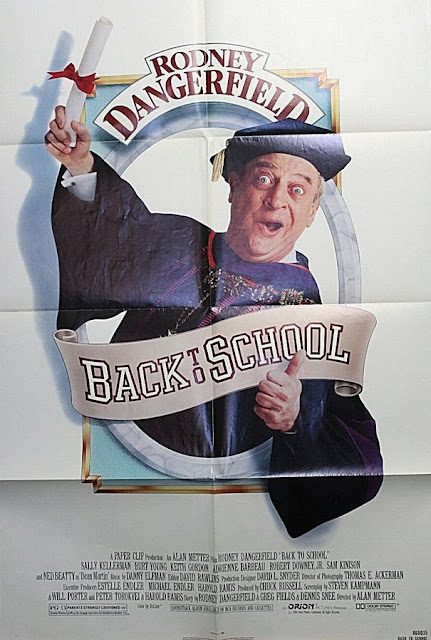 Ha ha and howaya, it’s Burl! Today I’ve got a Rodney picture for you - Rodney Dangerfield that is, the man who could get no respect! We’ve seen the old collar-puller before in pictures like Caddyshack, but this movie, Back to School, is probably the closest he came to actually getting some respect in any of his cinematic forays! This or maybe Natural Born Killers, ha ha!

I remember having a good time with this one when I saw it in the theatre, and, just as Roger Ebert tends to give an extra star to movies set in Chicago, I automatically apply an extra layer of retroactive fondness to movies I saw on the big screen, which is why, when appropriate, I add a tag to that effect at the bottom of the review! I additionally admit to a baseline enjoyment of any movie that takes place on a college campus, be it comedic, horrific, dramatic or science fictional! So take my praise for Back to School with a grain of salt, won’t you? It’ll be pretty mild praise in any event!

Dangerfield is Thornton Melon, a rough-hewn business magnate who decides to finally get a college degree, and to that end joins his mild-mannered son at Great Lakes University! Melon’s son is Christine’s old pal Keith Gordon, and while this casting  doesn’t on the face of it seem particularly apropos, it turns out, somehow, to work perfectly! The junior Melon, Jason by name, has a kooky friend played by Robert Downey Jr. (perhaps most famous from Weird Science), whose character seems an aggregate of about seven different campus-movie clichés; and the easy-going literature professor Thornton falls in love with as soon as he sees her is played by the recently deceased Sally Kellerman from Moving Violations, who’s very charming here!

The salutary casting continues! Melon has a chauffeur/pal/bodyguard played by Burt Young, whom we all recognize from Blood Beach, and who tells a horrifying tale of the time he put his son through a wall! Of course Ned Beatty, the actor we know so well from Silver Streak and Rolling Vengeance, plays the dean, Dean Martin (ha ha!); the ever-delightful M. Emmet Walsh from Blade Runner is the diving coach (diving is Jason’s chosen sport, a skill he inherited from his bugeyed pa); and naturally William Zabka from Just One of the Guys plays the blond preppy frat bully who cramps up mysteriously at the end!

Even the bit parts are often filled with delightfully familiar faces! Severn Darden from The Mad Room plays an amiable ape professor; Adrienne Barbeau of The Fog is Thornton’s bitchy ex-wife; and there are appearances from Edie McClurg of Ferris Bueller’s Day Off fame, Robert Picardo of Matinee, Jason Hervey of The Monster Squad (playing the young Thornton), and of course Kurt Vonnegut, playing himself! Ha ha!

On the one hand, the movie seems to simply make up the structure, protocols, and general reality of college life (at least as I remember it) as it goes along; but on the other, the location was well chosen and well used, and so, visually at least, the place feels like a real college! The movie itself is surprisingly bereft of Animal House-inspired college tomfoolery (even though Harold Ramis was one of the writers on both pictures), and the stakes are so low as to be non-existent! Will Thornton pass his exams, or will he get booted out of college? He’s a rich and jolly bonvivant either way, ha ha, so who cares!

Yet he’s a likeable old cuss for a’ that, and we do hope for him to succeed! I didn’t care much for his dirty-old-man routine while he sings a pretty gruesome version of Twist & Shout, and the way the movie tries to have it all by making Thornton both fabulously wealthy and a man of the people doesn’t fully pass the plausibility test, but Dangerfield manages a comradeliness that overrides all that! And of course he provides many of his patented zingers, tossing them out like the pro he is! Back to School is a solid if not outstanding 80s comedy, and I’m pleased to give it two and a half crushed napkin caddies!
Posted by Burl at 16:17

Email ThisBlogThis!Share to TwitterShare to FacebookShare to Pinterest
Labels: 1980s, comedy, saw it on the big screen, school, sports