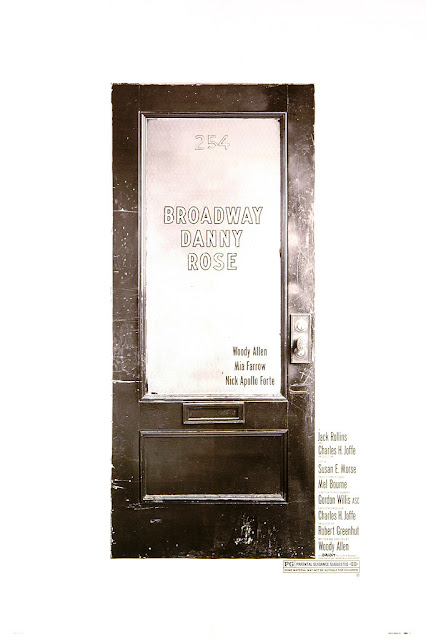 With a schvitz and a plotz it’s Burl, here to review a little more of the woodman! Yes, it’s a picture from Woody Allen, whose work we know in the form of Sleeper and Midnight in Paris and oh so many others, and this is one of his smaller works from the 80s! Ha ha, my favourite of these is Zelig, but I’ve always liked this one too - another black and white number, as it happens! Yes, it’s Broadway Danny Rose!

There’s a fraternal coziness to the picture, a tone set from the beginning, where we the viewers move through Carnegie’s deli in New York to a table of aging comedians, all playing themselves, and telling each other jokes and war stories! Ha ha, instantly we’re in a world that’s not our own, but becomes fully developed as soon as you see these guys: the meat and potatoes New York punchclock showbiz world! And the comics get to talking about a legendary figure, Danny Rose, a small-timer they clearly regard with great affection!

The bulk of the movie is told in flashback: the best Danny Rose story there is! (Sandy Baron, whom we know from his appearance in Vamp, is the comic who tells the story!) And of course Allen plays Danny Rose, who turns out to be a sweeter version of the usual Allen character: a talent agent and personal manager whose acts are all two-bit, if that, but whom Danny loves, believes in, and treats as family! His earnest solicitude towards the folk he manages is enormously endearing!

There’s not a lot of plot, but what there is goes as follows: Danny has one client who’s on a bit of a roll, namely a lounge singer called Lou Canova, played by real-life lounge singer and one-time movie actor Nick Apollo Forte! Lou is a family man (there’s a scene in which Danny has dinner with the family and asks the young daughter how old she is; learning that she’s twelve, he asks “Are you married?" Eesh!), but he has a ladyfriend on the side, Tina! She’s played by Mia Farrow, who made her Allen debut in A Midsummer Night’s Sex Comedy, and when Lou gets a big opportunity to sing in front of Milton Berle and Howard Cosell, it’s Danny’s job to escort the dame to the gig!

Of course it all goes pear shaped when misunderstandings lead to Danny and Tina being chased by gun-toting thugs! Lou meanwhile is getting loaded, and it looks bad for everybody! Ha ha, I won’t tell you how it ends, but it involves the most melancholy Thanksgiving dinner ever, and a bunch of Danny’s sad-sack acts, and it brings us back to Carnegie's!

The beautiful monochrome, the inside-baseball feel to the New York showbiz world, the nearly indefatigable optimism of Danny Rose himself, and the surprisingly solid performance of non-actor Forte as Lou, along with the perfect songs he wrote for his character, all combine to make this one a charmer! Sure, it’s lightweight, and has some uniquely creepy Allen moments, but if you can bring yourself to watch a Woody Allen picture at all (some can’t, and I respect that!), this picture, the scene with the twelve year-old aside, is among your best bets for satisfaction!I give Broadway Danny Rose three gumbas!