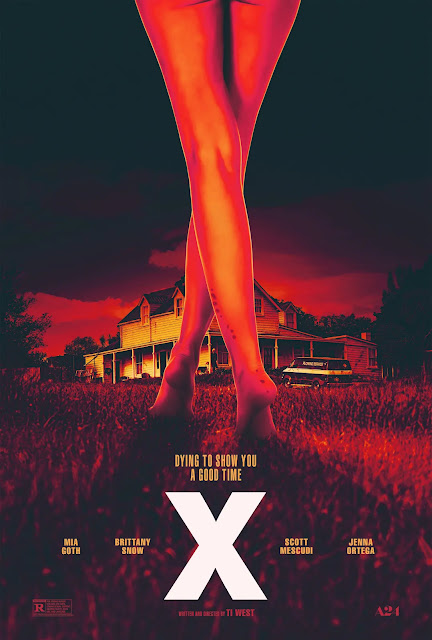 Hi alla y’all, it’s Burl, here with a tale of Texas terror! Ha ha, the letter X has been used in horror movie titles before, but as with X the Unknown and The Amazing Mr. X and Jason X and The Man From Planet X and The Strange World of Planet X, there’s usually a little something accompanying that single character! Not so here! The picture I’ve just come home from seeing is called X, very simply and tout court!

Yes, it comes from that horror upstart Ti West, whose casually-metered pictures I quite like! He’ll tell the story the way he wants to, by gum, and no newfangled pacing trends are going to force him to do any different! But this picture is maybe one of his bigger crowd-pleasers in that respect, and certainly it’s not lacking for provocative content! It’s terrific to see, in fact: a modern picture that’s in large part about sex! I keep hearing how chaste the younger generations are these days, so maybe X will seem pretty alien to them!

It starts with a little gang of Texan youths driving in a van along the hot highway on their way to an old house in the middle of nowhere in the 1970s! Ha ha, clearly we’re in Tobe Hooper territory here - the opening gets most, but certainly not all, of the Texas Chainsaw Massacre referencing out of the way, and the pond gator we meet later gives us that touch of Eaten Alive!

It’s 1979, and the gang is out to produce a cheap little 16mm pornoo picture! Of course we know they’re really making a horror film, even if they’re not aware of it, but for quite a while we follow them as they beaver away at this enterprise! The picture is being produced by Wayne, played by Martin Henderson from The Ring; his girlfriend Maxine, essayed in feathered locks by Mia Goth, has a taste for the devil’s dandruff, and is one of the pornoo stars! The male star is none other than a be-Afroed Kid Cudi, whom we recall from Bill and Ted Face the Music, and there’s another star, a blonde lady (the pornoo is called “Farmer’s Daughters”), and then the film-geek director/cameraman and his withdrawn sound recordist girlfriend, played by Jenna Ortega from that new Scream picture!

The farm they’ve chosen for their location is owned by an elderly couple not evidently overfond of company! The old folks have a slightly rubberized look, like Robert Englund in The Mangler, or Winona Ryder in Edward Scissorhands, and ha ha, when they made the old gent’s prosthetics there must have been some leftover orc makeup at the WETA workshop because he’s a pretty gruesome customer! And these are full-body makeups, it should be noted, ha ha!

It all goes wrong for these would-be filmmakers, but I won’t detail just exactly how! There are plenty of referential bits: Psycho is embraced as energetically as TCM, right down to the dialogue! (Come to think of it, strange these characters didn’t mention TCM, as it would have loomed pretty large on their cultural firmament just then!) Things simultaneously go in surprising directions and exactly how you think they will, and there’s a deeper theme that underlines the importance of the genre these characters have chosen to work in! The bookending sequences have James Gaylin from The Meg playing the local sheriff, who just can’t believe what he’s finding on this crazy farm, and who gets the last word!

It’s a well-mounted, well acted movie, even if really just a slasher picture with unusual (or maybe not so unusual) motivations! The Texan accents are creditable, the location a reasonable simulacrum of Texas (the picture was shot in New Zealand), and the whole thing put together with a casual, anachronistic fearlessness! It never gets all that scary, but there are some seat-clutchers along the way! I enjoyed myself, but, ha ha, I was the only one in the theatre, except when a couple of kids came in and stayed for fifteen minutes of so through some of the gnarlier scenes! Ha ha! Anyway, I brought a beer along and had a fine old time at the movies, so I give X three roll-outs!