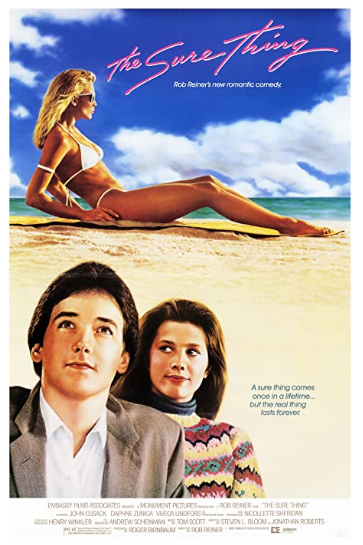 Hello everybody, it’s Burl here, driving with a load not properly tied down! Yes, I’ve got a tale of young romance for you, a picture that was declared a worthy successor to It Happened One Night, but with the hip stars of today instead of Clark Gable and Claudette Colbert! Here in fact we get John Cusack from Tapeheads in his first big starring role, and Daphne Zuniga from Last Rites and The Fly II in her first big non-slasher role, and the picture is quite simply called The Sure Thing!

It’s a Christmas picture, or at least a Christmastime picture, so it’s appropriate to review at this time of year, ha ha! Of course Zuniga was already an old hand at Christmas pictures, having appeared in The Dorm that Dripped Blood, and Cusack would later return to the Yuletide well with The Ice Harvest! It’s also in large part a road picture, and I usually like those! Along with Fandango, this was a VHS road trip movie favourite among my pals and I. though never as revered as director Rob Reiner’s previous picture, Spinal Tap; but I think that ought to go without saying! And it was part of quite a run for Reiner - Tap, this, Stand By Me, The Princess Bride, When Harry Met Sally, and Misery, all in a row! That’s a lot of middlebrow quality!

Cusack, for his part, had a knack for discovering that sweet spot between cool guy, average guy, and nebbishy loser: he did that in Better Off Dead and One Crazy Summer and Say Anything and even Hot Pursuit, and he does it here, possibly for the first time! He plays Gib, a semi-playa in his first year of university, who is invited by his buddy Lance, played by Anthony Edwards from Gotcha, to travel for the winter holiday from his snowy Northeastern campus to the sunny beaches of California, where he is assured by Lance that a Sure Thing, which I gather means a beautiful lady who will put out, will be waiting for him!

This is the dubious premise of the movie and of Gib’s westward trek! First, though, he tries his luck with brainy gal-next-door Alison, played by Zuniga, but his false-pretenses ploy backfires and she takes a strong dislike to him! The next thing you know they’re carpooling out west together, in the company of a showtune-loving couple played by Tim Robbins from The Hudsucker Proxy and Fraternity Vacation, and Lisa Jane Persky from When Harry Met Sally!

Familiar 80s faces along the way include big fellas Joshua Cadman, who was Bronk in Goin’ All the Way, and George Memmoli from Lunch Wagon; perennial dowager Fran Ryan from Stripes and Quiet Cool; the always-Grandpa Richard Hamilton, who gramped it up in Protocol and Heaven Help Us; sad sack Larry Hankin from Planes, Trains and Automobiles; John Putch from Jaws 3-D; Garry Goodrow from The Prey; and of course an appearance by Carmine Filpi, the man who made a career out of playing drunks, winos, cork-pulling hobos and barrel-scraping stewbums in pictures like Escape From New York, Pee Wee’s Big Adventure, and The Wedding Singer!

Gib fantasizes about the nameless Sure Thing played by Nicollette Sheridan from Spy Hard, while Alison exchanges telephone calls with her incredibly boring boyfriend Jason, played by Boyd Gaines from Porky’s! They catch the boot from Robbins and Persky, try their luck at hitchhiking and the ‘Hound, and eventually pull a ride with Hankin’s hangdog trucker, during which Alison overhears Gib talking about the Sure Thing! “All my life, I never had a Sure Thing,” moans the trucker, as though a Sure Thing was really a Thing! And when Gib finally reaches his destination, finds his pal Lance and is introduced to the Sure Thing - who seems congenial enough but about as sharp as a bag of wet mice - we wonder what he will do! Ha ha, a fade to black keeps the answer unknown for the nonce!

I have to take a paragraph and ask just what’s up with this plot! The characters all talk about a Sure Thing in capital letters, like it’s a known and revered phenomenon instead of just a way to call a woman a brainless, agency-free life-support system for a vagina! Even in my teens I thought this was weird and off-putting, and I wasn’t an especially sensitive teen! It might have worked if the Sure Thing had subverted our expectations in some way, but she doesn’t! She turns out to have every bit of the personality and self-possession that her name, or title, or whatever, would indicate, and all the other characters, even Gib, treat her abominably!

Even though Gib ultimately fails to exploit this woman’s legendary surety, or claims he does, the last act of the picture and the overriding concept leaves a bit of sour paste on the brush! Ha ha, but there are plenty of delights: funny lines from Cusack, a general amiability (Gib is uncommonly gentlemanly for an 80s dudebro), and that terrific cast! (Viveca Lindfors, a favourite of mine from Creepshow and Silent Madness, plays the English professor for whom Gib writes his clunky middle school-level compositions!) The romantic aspects, I will admit, hooked me as a teen, and that part of it, along with all the road trip stuff, still has great appeal! It’s got its problems, but on balance I’ll give The Sure Thing three green duffel bags!