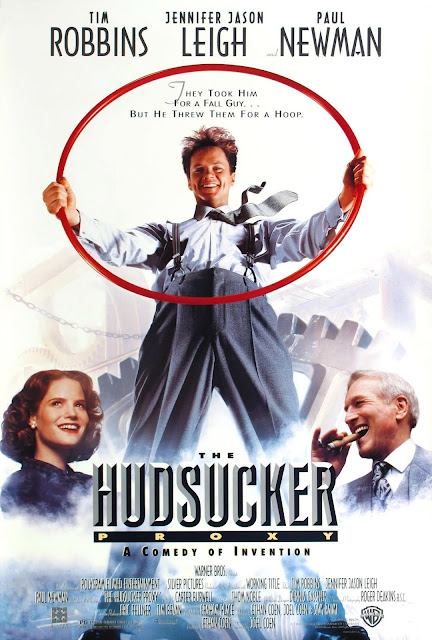 Hi! My name’s Burl with my hair in a curl! I write the reviews that make you unfurl! Ha ha! I realize that doesn’t make any sense - no, I don’t even have curly hair! - but I’m trying to usher you all into the spirit of today’s review, which is for the Coen Brothers’ big-budget curio The Hudsucker Proxy!
Ha ha, it’s one of those movies a studio spent a lot of money on, but which is so out of the current of popular moviedom that you can’t imagine it ever making a penny at the box office! I certainly went to see it, you can bet your nellie, but the weekend it opened, March 11, 1994, Guarding Tess and Lightning Jack also opened, and both of those skunked Hudsucker, if you can believe it! But who remembers those pictures? Ha ha, nobody!
The story is laid in December of 1958, but its heart is further back, in the 30s! Inspiration is taken from screwball comedies and newspaper pictures with fast-talkin’ dames, and Frank Capra hovers over the production like a portly man in an angel costume, dispensing some It Happened One Night here and some Meet John Doe there!
Tim Robbins, the well-known presence from Tapeheads and Fraternity Vacation, plays Norville Barnes, fresh off the bus from Muncie and ready to conquer the New York City business world! And ha ha, there’s no bigger business on the street than Hudsucker Industries! He starts in the mail room, of course, where everybody starts; meanwhile, to the consternation of the Board of Directors, Hudsucker prexy Waring Hudsucker takes a dive out of the 44th floor boardroom window - 45th floor if you count the mezzanine!
For reasons, the board must find a dim-witted proxy to take over for the prexy until the close of the year, and naturally they find Norville, and events unfold from there! Cynical newshound Amy Archer, played with a Hepburn accent by Jennifer Jason Leigh from Grandview U.S.A., gets involved, as does the Hudsucker second-in-command perfectly essayed by disaster king Paul Newman, from When Time Ran Out and The Towering Inferno! Sure sure, ha ha! Charles Durning from Stick plays old Waring Hudsucker, who returns from the grave in angel form; John Mahoney from The Manhattan Project is Amy’s blustery editor; none other than Bruce Campbell from Army of Darkness plays her snap-brim co-worker; and Bill Cobbs from Trading Places manfully wrestles with the picture’s weakest conceit, the Wise Old Black Janitor Who Can Stop Time If Need Be!
Much of the picture turns on Norville’s great brainwave: the hula hoop, which he has drawn out as a circle to show off to people! “Would an imbecile come up with this?” he demands! Ha ha! The picture has a centerpiece sequence in which the newly released plaything languishes on shelves until an amazing kid picks one up and starts doing tricks! Hula hoop madness sweeps the nation, but still the story brings us, like Meet John Doe, to the ledge of a building at midnight!
The picture is filled with verbal and visual invention, and with game actors who give off the artificial dialogue with joyful aplomb! It’s all very artificial, of course, which creates a distance between the viewer and the narrative, but it’s also a snap-brimmed good time! It’s not one of the Coen’s strongest works, but it was still a lot better than most of what got released in 1994, ha ha! Yes, it’s better than Clifford! I give The Hudsucker Proxy three extruded plastic dinguses!
Posted by Burl at 12:13