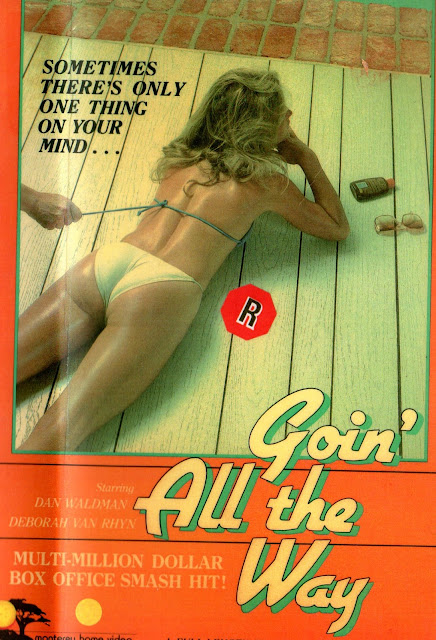 Ha ha, Burl here to review a movie about the frustrations of young people! Here is a movie that, as the back of the video box says, is “Goin’ All the Way to the screen all fun-packed high good times!” Yes, that’s what it says! And even though it makes no sense at all, it’s still a pretty good précis of the oddity that is Goin’ All the Way!
There are a few classic story templates out there that get used over and over again! The Odyssey is one of them of course, and Romeo and Juliet, and still another is Archie Comics, which is the model heavily relied upon by Goin’ All the Way! The Archie figure is here called Artie Mulligan, and he’s a sort of gormless, halfway-handsome lug of a guy, and the Veronica proxy is his girlfriend Monica, who won’t make love to him! Ha ha, hard to blame her! Artie’s rascally friend Reggie – ha ha, they didn’t even bother trying to find a different name for this fellow – convinces him that taking Monica to a motel would get the old flywheel spinning! But Monica throws a Cornish Hen, which is a sort of tantrum way out of proportion to the perceived offence, and kicks Artie to the curb!
Well! There’s a subplot involving wrestling women that kicks in at around this point, and the connection between the two narrative strands is the Big Moose stand-in, here called Bronk! (Bronk, by the way, is played by none other than Johnny Big Head from Surf II!) Anyway, Bronk’s girlfriend Candy, aka Midge, shows an interest in Artie now that he’s fancy-free; and somehow Monica hooks up with some kind of 70s holdover guy who declares himself “a songwriter – among other things!” He’s the slimiest character seen on film since the yachtsman from Summer Night Fever!
It all comes to a raging climax at a Sadie Hawkins dance, of all things! Everyone’s wearing hayseed outfits, except for Reggie who’s dressed like Nahalla from The Ghost Dance! Ha ha, were Sadie Hawkins dances ever really a thing? Not where I come from they weren’t, I can tell you that! I won’t tell you how it all works out except that it’s exactly as you expect it will, with the addition of a final shot involving Bronk standing there hog-tied, naked and shaved bald as a cueball!
This is a Teen Sex Comedy all right, but a strangely lifeless one despite all the weird goings-on! The wrestler girls are an odd addition to the formula, and the Sadie Hawkins dance is a head-scratcher too! Bronk is a pretty unpleasant character – it always seems like he might turn nice, but he just gets worse as the picture goes on! But there’s something so basic about the movie that I kind of liked it anyway, despite all the undeniable lamenesses which abound! It’s worth seeing for the recording studio scene alone, which rivals the famous one in Pod People! I give Goin’ All the Way a solid one and a half weird bike-riding fantasy scenes!
Posted by Burl at 00:03