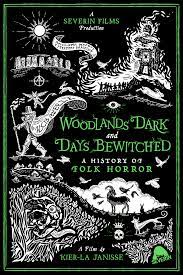 From deep within the creaky fen I cry “Ha ha!” Yes, it’s Burl, here to review a new documentary picture, which provides many things, not excluding a kaleidoscope of movie clips, a long list of films to watch, a great huge gallery of gabby movie nerds, and a sore bum, because the thing is well over three hours long! Ha ha! It’s a study of folk horror on film and television, and it’s called Woodlands Dark and Days Bewitched!

The picture is divided into chapters: six of them, to be precise! We open with a look at British folk horror, which is a smart decision because while it’s not the fount from which all other folk horror has sprung, it’s likely the most common entry point into the genre for most viewers! Ha ha, we’ve all seen Witchfinder General, The Wicker Man, and Blood on Satan’s Claw, and so those three pictures, which interviewees refer to as the Unholy Trilogy, are tackled first, and this leads into a section on British TV horror of the 1970s, very little of which I’ve seen!

From here we spread out into other regions: North America, Asia, the Down Under areas, so forth! There’s a bit on the Icelandic picture Tilbury, ha ha, and Rawhead Rex, and mentions of the Indian Burial Ground nonsense featured in movies like The Shining and Pet Sematary, and the goofiness of this in underlined by one of the interviewees, Jesse Wente, who points out that when you’re disinterring legend on Turtle Island, remember that it’s all an Indigenous burial ground! Other interviewees include the director of The Lighthouse and, more relevantly, The Witch, Robert Eggers, and Alice Lowe, co-writer and co-star of Sightseers!

The doc goes on (and on, and on!), exploring the early works of folk horror, which are of necessity not that ancient themselves, as it takes time for story to become myth! The fifth chapter is titled something like “Folk Horror Around the World,” and it’s here that the movie becomes less of a documentary and more of an essay film, which is not in itself a bad thing, but doesn’t feel completely purposeful! Indeed, the fifth chapter is by far the longest, and one really starts to feel the running time here! But the earlier chapters, more concise and skillfully organized, at least give this one a solid foundation upon which to overextend itself!

Many clever people are interviewed, and they make many clever and worthwhile and illuminating points! Ha ha, I learned a lot! But the interviewees are frequently allowed to digress, and often these digressions are of interest, but at other times they just seem to extend things more than is necessary! And, as seems unavoidable with the weight of all this material and diverse historical knowledge, the picture eventually goes beyond its remit and includes movies that I myself would call folk horror only by the broadest and most generous of definitions!

Still, it’s not my movie, is it! And the impression one walks away with (after one has regained feeling in the buttocks and properly emptied the bladder) is that the sheer amount of effort put into this picture is stunning and very much to be admired! Like most great catalogue works, there’s a feeling of inevitability about it, and necessity, and it’s-about-time, but also the strange impression that this study has already been done, that the scholarship has previously been lassoed into just this form - that, ha ha, we’ve seen this movie before! And of course it hasn’t and we haven't, but that sense too is a testament to the project: an indicator that it badly needed doing and has indeed been done right! There’s a lot to discover here, and so I recommend catching the movie whenever you have the opportunity! For both ambition and achievement, I give Woodlands Dark and Days Bewitched three wizard sticks!
Posted by Burl at 13:30

Email ThisBlogThis!Share to TwitterShare to FacebookShare to Pinterest
Labels: 21st century, doc, horror, movie about movies, non-fiction, saw it on the big screen