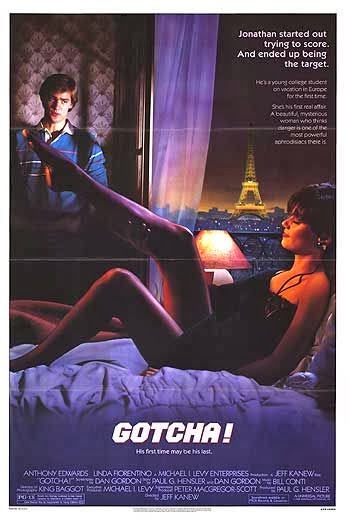 Ha ha, gotcha, it’s Burl! Yes, I’m here to review this goofnugget from the 1980s, which I pretty well ignored from the day of its release until just very recently, when I sat down to watch it on VHS cassette! I’ve ignored it all these years, sure, but I’ve also secretly wondered: is this picture any good? It comes from the director of Eddie Macon's Run, so it could go either way!
Well I’ll tell you: it’s not completely terrible! I mean, ha ha, it’s not tremendously good either, or even much good, but it was a little better than I thought it would be! It has a few small laffs here and there, some authentic location photography, and a bad guy who looks like a German version of Kurtwood Smith from Robocop!
The story begins with the king nerd himself, Anthony Edwards, known for his work in Pet Sematary II and The Sure Thing, playing a campus paintball game with his buddies at his California university! Ha ha, pretty nerdy all right, and I’m not sure how well such a game would go over today with the campus police! (Ha ha, same deal with Final Exam, if you’ve ever seen that fine picture!)
Despite resistance from his parents, played by Alex Rocco from Stick and TV actress Marla Adams, a young, naïve and virginal Anthony heads to Paris with his pal, played by Nick Corri from A Nightmare on Elm Street! Soon Anthony meets the girl of his dreams, a heavily accented Linda Fiorentino, known for her roles in After Hours and The Moderns!
As with the dire Target, much of the movie was shot rather dully on location in Paris and Berlin, but for the most part could have been filmed anywhere! The exception is some decent use made of the Spandau Citadel, but otherwise the various alleyways and gated checkpoints look pretty backlot!
Of course Anthony gets caught up in some kind of vague Cold War-era espionage thing (the import or even contents of the McGuffin film roll is never even revealed, ha ha), and loses his love-cherry to Linda, but the mild surprise is that it doesn’t happen in that specific order! Not so surprising is the moment late in the film where Fiorentino finally drops her fake accent, ha ha! You wait the whole picture for that moment, because it’s so manifestly in the cards! She actually doesn’t to a terrible job of it, but it’s a well-used plot convention in pictures like this, and therein lies the obviousness!
Like pre-wall-fall Berlin, this movie is divided into partitions! The thriller aspects of the picture are the least convincing, and the romance is not much better, but the comedy is at least fitfully amusing! The checkpoints between these districts are apparently nigh impassable, though, and the movie flips around between them like a bored late-night channel surfer!
It’s all pretty contrived and predictable, but there was some ineffable quality I enjoyed about it! Its lightheartedness, maybe! Anyway, Gotcha! is not the worst quindilla on the block, and I give it two followings!
Posted by Burl at 09:05