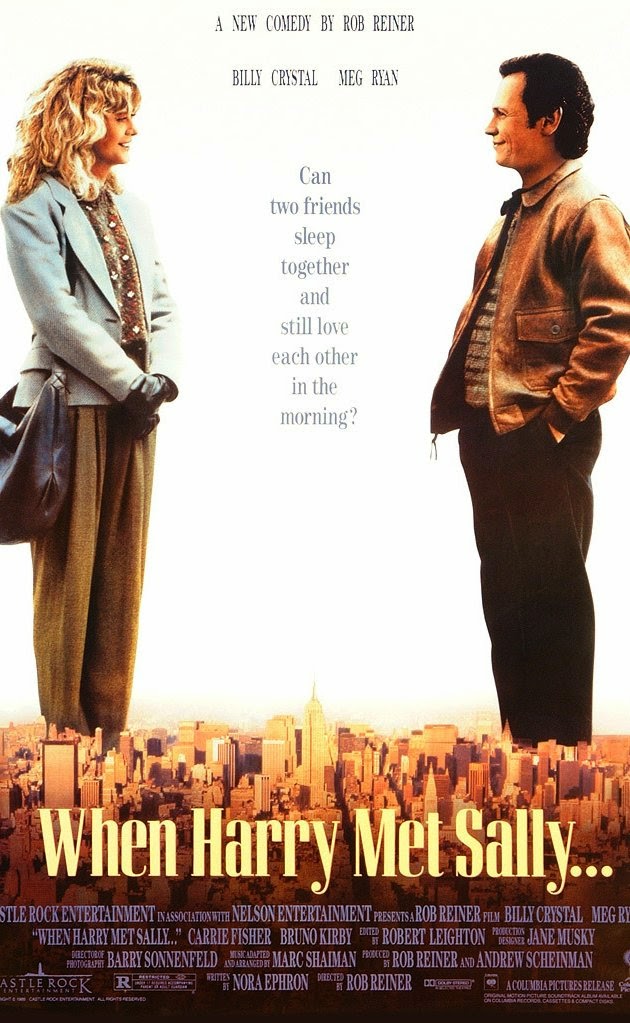 Ha ha, potato po-tah-to, it’s Burl! Yes, I’m here to review  one of the godfathers of the modern romantic comedy, When Harry Met Sally! Ha ha, movies don’t get any middlier than this, but I have a slight fondness for it based on Burl’s own personal experiences surrounding a theatrical viewing of the picture! Plus it fits into a microgenre I don’t exactly like, but that intrigues me: Movies That Take Place At Different Times Of Year And So Were Probably Difficult To Schedule! Funny Farm is one of those as I recall as of course is Alan Alda’s cardigan-wearing The Four Seasons! Ha ha!
An added bonus in this genre is, of course, when the seasons are distinct and well-used and the holidays are given prominence! Yes, ha ha, in When Harry Met Sally you get your summer, your leaf-dropping fall, your Christmas scenes and New Year climax! In between you get comedic misanthropy, bonding over classic films, some repetitiveness, a few laffs and a fair bit of gurning! The conclusion is a’foregone, of course, ha ha!
There’s a sense of character progression as the two characters, who initially seem like caricatures, edge toward, though still keep a ways from, the corral wherein the real people graze! We know the plot of course: Harry and Sally drive from Chicago to New York not having known each other previously, fail to get along, and over the next decade and change become friends, then lovmakers, then enemies, and ultimately spouses! Ha ha, pretty rote, though it was mildly fresher back then, probably!
I’m a wild fan of neither Billy “Running Scared” Crystal nor Meg “Innerspace” Ryan, though I certainly have nothing against them! Here they seem a bit shticky, ha ha, but have good moments throughout! Rob Reiner had some successes under his belt, like Stand By Me and The Princess Bride and that sort of thing, plus Spinal Tap; this, I guess, continued it as far as he was concerned! I’ve never seen the military courtroom one, so don’t ask me anything about it, ha ha! Nor can I explain why Reiner suddenly seemed to stop being able to make this sort of picture after a certain point!
I don’t guess there’s a lot left to say about this picture! I’m no expert in the development of the romantic comedy, but as I’ve mentioned, I think this can reasonably claim to be an important part of it! Anything that gets held up as an exemplar of its genre has some standing, I suppose! I give When Harry Met Sally two and a half baby fish mouths!
Posted by Burl at 09:16

Email ThisBlogThis!Share to TwitterShare to FacebookShare to Pinterest
Labels: 1980s, comedy, drama, romance, saw it on a date, saw it on the big screen