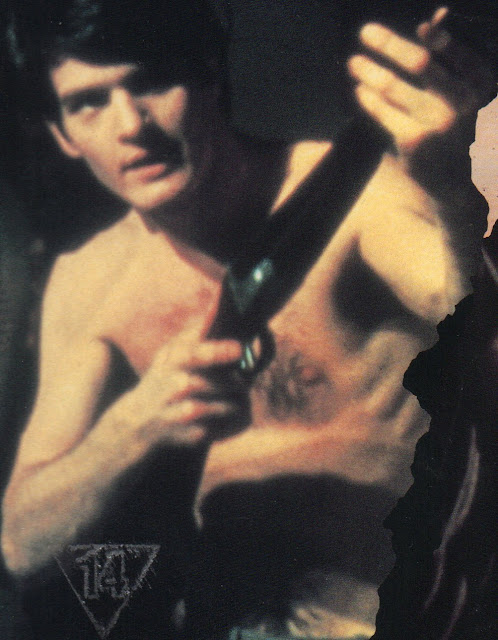 Good day, eh! It’s Burl! I’m here to review a picture that’s as Canadian as apple pie, and twice as sweet! It’s called Explosion, and I should clarify right off the top that we’re talking about a mental explosion here, not a big old flaming fireball! There’s a little bit of mayhem in the picture, but no explosions of the usual sort!
The movie was made during the Vietnam War times, so that conflict figures in heavily! It seems that, somewhere down in America, a Very Sensitive Lad named Alan, played by Gordon Thomson from Starship Invasions, is slowly going mental! His beloved older brother Peter (played by Robin Ward from Dr. Frankenstein on Campus) has been sent off to war by the browbeating of their nasty father, and it was there Peter was killed by the ‘Cong! So Alan does what Peter had planned to do, which was run off to Canada and join a commune!
There he meets Ritchie, another draft dodger, and they become unlikely pals in the mold of Joe Buck and Ratso Rizzo! They have adventures in Vancouver and in increasingly bleak areas around Vancouver! But Alan, who is extremely highly strung and speaks in a girlish voice that seems forever about to crack into total hysteria, has a nasty habit of imagining people are actually his father, then killing them! His psychiatrist, played by Richard Conte, is hot on his trail just like Dr. Loomis in Halloween, warning everyone who will listen that Alan is on the verge of a complete Explosion!
It all comes to a climax high in the mountains of B.C., where Alan descends fully into hallucinogenic mania! He’s surrounded by Mounties, but believes himself to be in Vietnam fighting the very same ‘Cong that killed his brother! Well, needless to say, the ending is a bit on the tragic side, involving flying bullets and a weeping Stroud!
Alan is a pretty funny character, with his plummy Lord Fauntleroy diction and his turtleneck sweaters! His pal Ritchie is played by the great Don Stroud, whom we know from The Amityville Horror and Death Weekend and Armed and Dangerous! His performance is kind of heartbreaking! It’s nice to see Richard Conte in a role that doesn’t require him to be a soldier, a cop or a gangster, though he’s good at playing all those parts! Remember him in The Big Combo? Ha ha, that was a terrifying performance!
It’s a strange picture, this one, though it looks pretty good, with its moody photography from Joseph Brun, who shot the great caper picture Odds Against Tomorrow! It’s got some ludicrous folk songs in it and a lot of very funny scenes, like when Alan and Ritchie get into a fight in the woods and a live-action Elmer Fudd ambles by and breaks it up!
But it’s ultimately just a dewberry, a Wet William that doesn’t deliver on whatever muddled themes it’s got rattling around in its head! Anti-war? Ha ha, what a bold stance! Perhaps it’s a plea for greater compassion and care towards the mentally unstable! The expression of chagrin on Richard Conte’s face as his patient is gunned down would seem to indicate so, but there’s not much else to go on!
I did enjoy the movie though! It has a certain bleak ambiance that I enjoyed, even though I usually don’t like to watch winter-set movies in the summer! I think I just enjoyed the desperately uncool earnestness with which it goes about its business, and of course I did like the performances from Conte and Stroud! I liked the attempts at au-courant elliptical editing, and the scenes of Alan bucksawing logs in his sweater and Hush Puppies! I give Explosion two blisters the size of quarters and urge you to seek out and watch this rare and cloudy gem!
Posted by Burl at 16:51