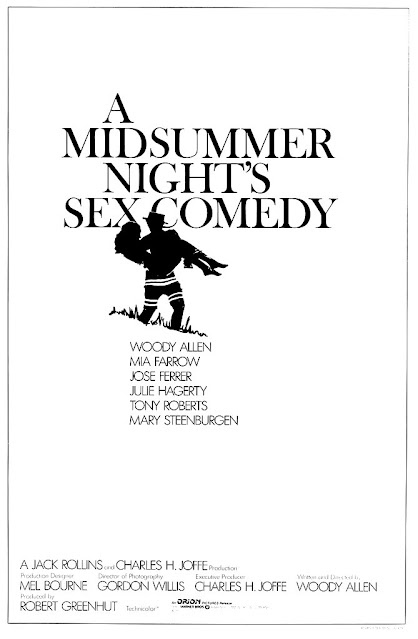 With a blast of Mendelssohn, it’s Burl, here to review a minor picture by the bespectacled comedian, upon whose private life I render no judgment nor pronouncement at this time! And I guess most of his pictures qualify as minor ones, though there are more than enough relatively major works salted into his vast filmography, the most recent and likely last of them being perhaps Midnight in Paris! (Or maybe that just seems major because of the time travel, ha ha!) But this picture, A Midsummer Night’s Sex Comedy, is decidedly minor!

It was intended as such from the get-go, apparently, and, in a largely salutary way, that intention shows! The picture is an amuse-bouche set in and around a country house in the early part of the century, with a group of mostly uptown folk gathering to celebrate, or to privately mourn, some upcoming nuptials! The house of course belongs to Allen’s character, Andrew, a stockbroker who spends most of his time inventing crazy things, like the machine that takes bones out of fish, or if you prefer, although there’s no point to it, it puts bones in fish! And he’s married to Adrian, played by Mary Steenburgen from Time After Time, who has lately been ignoring Andrew in the bedroom, causing him to spend ever more time in the barn crafting his inventions!

The picture begins with its only scenes away from the Andrew/Adrian property, in which we are introduced to the high-pated professor Leopold, played by José Ferrer from Dune and The Sentinel! Leopold is an intellectual and a blowhard, and he arrives at Andrew’s house in the company of his fiancée Ariel, played by Mia Farrow from Rosemary’s Baby! We also meet Andrew’s best friend Maxwell, a horndog medico played by Tony Roberts from Amityville 3-D! He invites candy stripe nurse Dulcy, essayed by Julie Hagerty from Airplane, along for the weekend, and thusly do we get our six main characters!

The relaxed and bucolic vibe of the movie kicks in once they’re all gathered at Andrew and Adrian’s house! Of course everyone is in love with Ariel: her Shakespearian name alone assures it! Andrew had once had his shot with Ariel, but blew it, and Maxwell falls deeply in love with her the moment he sniffs her! Ha ha! Now, I think this is one of the best performances Tony Roberts ever gave, but I must say that I found his instant obsession with Ariel one of the more irritating aspects of this picture, and it came as a distinct relief to me when he received an arrow in the heart!

Of course the picture is inspired by Bergman’s Smiles of a Summer Night, but with 70% more neuroses added in! There's an undercurrent of melancholy, of mourning for the ephemeral, with a key line being Ariel's observation that "This beautiful summer light doesn't last forever!" All the actors are good, and I particularly enjoyed Ferrer’s pompous academic, even if he was made a pretty easy target by Allen’s hastily-written script! There are some solid laffs, and the bohankie-farce aspect, which might have been tiresome had it been allowed to fully conquer the narrative, remains under control! It’s the easy country vibe, unusual for Allen, that makes the picture such a delight, and in perfect support of that we get marvelous cinematography from the great Gordon Willis, and lovely, pastoral second-unit shooting from that bearded Finn, Jeri Sopanen, who also shot My Dinner With Andre!

The last-minute detour into the lightly supernatural fits the movie well, and the use of Mendelssohn’s music is ideal! It’s a highly pasteurized work to be sure, but as light, enjoyable, and white as a glass of chardonnay on the lawn! Ha ha, I always enjoy a country house picture, especially ones as free from Chekhovian decay as this! I give A Midsummer Night’s Sex Comedy two and a half musical house slippers!

(And for anybody who's interested, this is my 900th movie review! How they do add up!)