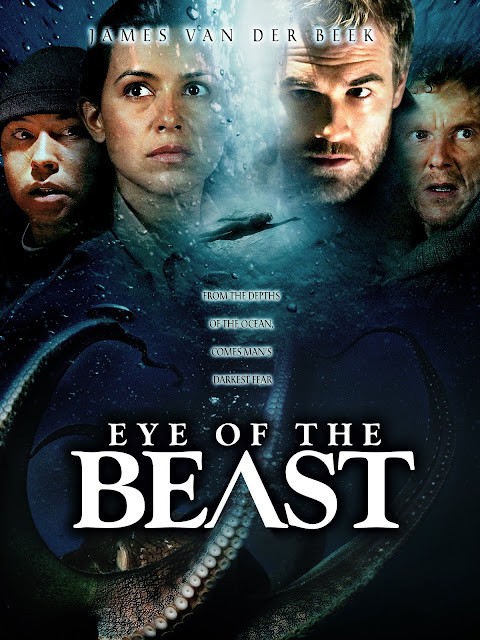 Snip snap slurp, it’s Burl, back with more to review! It’s time again for a little cephalopodic horror: a freshwater squid picture called Eye of the Beast! Ha ha, this one was not only shot in Manitoba, Canada, which is about as far from any ocean as you can get, but it’s set there too! So how could there be a giant squid problem in this landlocked prairie region? Well your guess is as good as mine, because they never explain it!
Ha ha, I’m getting ahead of myself as usual! Eye of the Beast is one of those cheap creature features they were making back in the oughts, most of them rip-offs of Jaws, and this one perhaps most of all! For it purloins not just the underwater beastie, but the opening scene with a lady being et; the troubled cop, the visiting scientist and the crabby sea captain; the discovery of boat wreckage, the disbelieving townspeople, and initial diagnosis of a boating accident; and the bifurcated structure wherein the first hour takes place on land and the second hour (or half hour in this movie’s case) aboard a boat on the hunt for the beast! In fact it borrows everything but the final method of the monster’s execution, electrocution! That, it steals from Jaws 2! Ha ha!
From Humanoids From the Deep it takes a community conflict between white fishermen and the Indigenous people who’ve been accused of over-fishing the area! The bizarre fact that all this takes place in a lake in the middle of the continent goes virtually unmentioned! All I could think whenever the fisheries officer lady, Cat, and the scientist guy played by James Van Der Beek tried to persuade people there was a giant squid swimming around in large shallow lake, was “Ha ha, no wonder they don’t believe you!” But indeed there is, and it’s represented either by dodgy digital effects, or by one floppy and overworked mechanical tentacle, or, as in the final topside appearance of the monstrous calamari, by the kind of fiberglass novelty cover you might affix to a monster truck called “The Sqidinator!” That the squid appears more frequently as a green dot on a tracking monitor than it does in real life is perhaps the saving grace of the trick effects here, because you hardly get a chance to see them!
I know just what you’re asking, though! “Ha ha, but Burl,” you’re saying, “are there any shots of the squid’s sharp, snapping beak?” I’m sorry to say that there is nary a one, and it’s a truly unaccountable omission! That’s what we killer cephalopod enthusiasts live for - it’s the money shot! But, as in Tentacles, this critical aspect is virtually ignored! Most of the attack scenes are done with an economy of spectacle a small town community theatre would envy, so I guess a snapping beak was simply not in the budget! But it sure should have been! It should have been an over-the-line expense in fact!
Now I know this all sounds terrible, and mostly it is! But it’s not quite as bad as all that in the end! The acting is variable, but in general stronger than one might expect! Arne Macpherson does good work with the Robert Shaw role, here reupholstered as an uxorious husband whose love for his wife is matched only by his disdain for everybody else, and who displays an inexplicable tolerance for his two racist dimwit deckhands! The script, generally dogged in its effort to follow its brief of aping Jaws completely, salts in a few minimally clever lines or ideas here and there, but almost seems ashamed to be challenging the form in even this insignificant way!
The paucity of incident and the absence of affrights are bad, but the total lack of beak-snapping is unforgivable! I can’t in any fulsome way recommend Eye of the Beast to underwater monster fans, and for its sins I give it one severed tentacle!