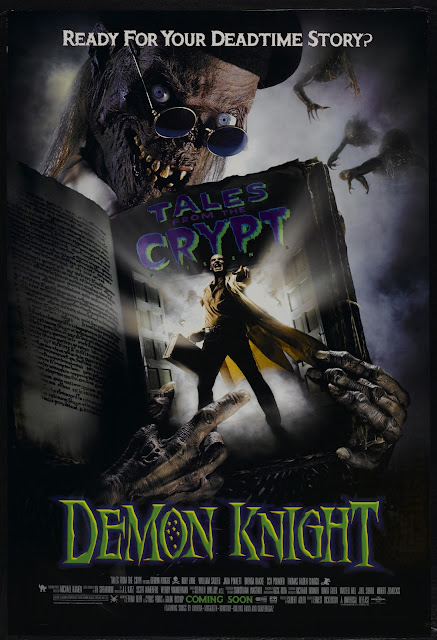 Well, a very good day to you, and ha ha, hello! It’s Burl here with a movie review! I wanted to tell you about the big-screen version of the Tales From the Crypt TV show, known as Tales From the Crypt: Demon Knight! Just to clarify, this is neither the old Amicus omnibus picture from the 1970s – that was the one with the scary Santa terrorizing Joan Collins, ha ha – nor the other TFtC picture, Bordello of Blood! I’ve never seen Bordello of Blood, mainly because I can hardly stand that man who’s in it, the obnoxious Dennis Miller!
Demon Knight does feature an actor named Miller, but by startling contrast he’s my very favourite actor, Dick Miller! He’s about as far from Dennis Miller as you can get, ha ha! And he gets one of his meatiest roles in this one, playing the seedy drunkard Uncle Willy! Dick has plenty of screen time plus a complicated trick effects death scene! Wow, you don’t see that very often!
I saw this one at the movie palace when it was first released, but watched it again very recently! But I still am having a little trouble actually recalling the plot of the thing! There’s something about William Sadler (whom you will recall from his bad guy roles in Die Hard 2 and Hard to Kill, ha ha) being in possession of some kind of magical item which is coveted by a demonic personality embodied by none other than Billy Zane!
Sadler takes refuge in some kind of hotel filled with various sorts of riff-raff played by entertaining actors! It quickly becomes a siege situation, in which everything from zombies to possession to severed limbs comes into play! Ha ha, Zane or his devilish minions take out the character actors one by one in gruesome and EC Comics-style ways! John Schuck, for instance, playing a sheriff, gets punched right through the head, yowch!
It’s not a very scary movie, but it’s stylish in a 1990s kind of way, and fast-paced and energetic, and it contains one of the most generous helpings of Dick Miller to be found outside the works of Roger “A Bucket of Blood” Corman or Joe “Matinee” Dante! For that reason alone it’s a movie experience to be reckoned with! The other actors are pretty good too, and Zane is particularly rib-tickling, or at least tries to be! He’s not bad, frankly! I’m going to go ahead and award Demon Knight two and a half sets of cunningly-placed antlers!
Posted by Burl at 21:19