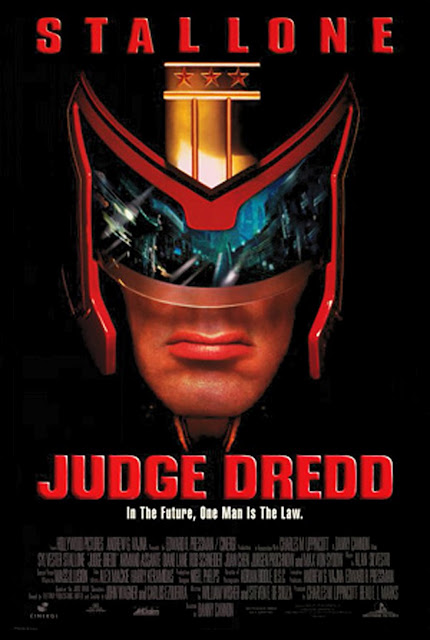 Ha ha, Burl here, and I AM THE LUAWRH! What does that mean? Well, you’ll simply have to read my review of this mid-90s futuristic action spectacular to find out! Ha ha, I’ll clear it up for you now, actually: the picture in question is Judge Dredd, and “luawrh” is the closest approximation I can make to the word “law” as pronounced by the picture’s star, the pebble-mouthed Sylvester Stallone!

Now this is the first filmed version of the story, not the 2012 version Dredd, which was grim and dark and 3D, and unfolded mostly, as I recall, in slow motion! Of course the Judge was a comic book character before he was anything, and I still remember the nerdrage that greeted the news that Stallone’s character would be – gasp! – removing his helmet in the course of the film! Ha ha, can you imagine! As someone who never read the comics, I didn’t care either way, but when I saw the picture (and reviewed it professionally, for that was back in my professional movie reviewing days), I realized that in fact it would have been better had he kept the thing on as much as possible!

There were quite a few wrong decisions made in the production of this movie, ha ha, and hiring Stallone to play the part might have been the Original Sin from which all subsequent malarkey sprang! We remember him as John Rambo in pictures like First Blood and Last Blood, and so having him play an emotionless dispenser of justice would seem logical; but like many stars at this level of celebrity, he evidently wanted to humanize himself as much as possible and demanded that extra comedy be inserted into the movie! Thus we get Rob Schneider from Wild Cherry playing a little hanger-onner called Fergie, and providing plenty of comedy annoyance all along the way! Fergie eventually has a small impact on the narrative, but mostly he seems to be there just to give Stallone the comedy foil he so desired!

The setting is the future society in which Judges roam the streets and serve as (naturally) judge, but also jury and frequently executioner! This fascistic situation has apparently come as a sudden surprise to some, particularly an investigative journalist played by Mitchell Ryan from Halloween: The Curse of Michael Myers, who is doing an exposé on the repressiveness of the system he and everybody else have lived in for decades and apparently never noticed before! When the journalist is murdered, Dredd is blamed, and he, along with his little sidekick, are stranded in the great wasteland outside of the giant Mega City, where they have to deal with blowing Fuller's earth, stacked tobacco filters, and cannibal mutants!

Former Judge Rico, played by Armand Assante from Prophecy, was the actual killer of course! He, in cahoots with Jurgen Prochnow from Dune and The Keep, playing Judge Griffin, are apparently trying to make this society even more repressive and fascistic, and there’s something about clones too! Dredd’s allies include Judge Hershey, played by Diane Lane from Streets of Fire and Indian Summer, and of course Chief Justice Fargo, whose noble brow could only be that of the great Max Von Sydow from Strange Brew and Dreamscape!

Some of the other performers include Johanna Miles from Bug as Judge MacGruder; Joan Chen from The Hunted as the evil clone-doctor Ilsa; with the warden of the prison Judge Rico escapes from played by Maurice Roëves, and, just as in Outland, he doesn’t last long before suffering a bloody demise, ha ha! There’s a solid cast here, but the most thrilling performer is a giant menacing robot that appears in the final act, and the trick effects that bring this automaton to life are impressive indeed! But he’s defeated too easily, and by Rob Schneider yet!

My final judgment is that Judge Dredd is a pretty terrible movie that doesn’t live up to the promise of the concept or the character! The script is bad, the politics uncommitted, the action scenes unexciting, the staging poor (why are those bursts of flame coming from that direction, anyway?), and there’s a real by-committee feel to the whole enterprise! The trick effects are good though, and it’s clear they spent some coin on this thing! Too bad it’s not very good, ha ha! I give Judge Dredd one and a half bursts of flame!

Email ThisBlogThis!Share to TwitterShare to FacebookShare to Pinterest
Labels: 1990s, action, saw it on the big screen, sci-fi