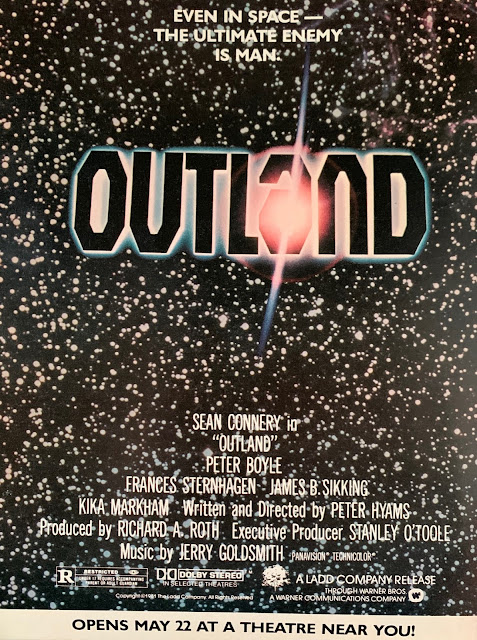 Ha ha troubleshooters, it’s Burl, here with an outer space Western for you! The picture under discussion is not Battle Beyond the Stars or Space Rage, but a much bigger-budget affair: the Peter Hyams-directed bonspiel known as Outland!
Now: in the U.S.A. Outland was rated R for foul language, violence, drugs usage and bursting people; but here in Canada we kids could go see it ourselves, and I, as an apple-cheeked pre-pubescent, did just that! Ha ha, I may have done it more than once, in fact! And it made a big impression on me, because the material was pretty adult, the bursting-people scenes were impactful, and after all, ha ha, it was set in space! That’ll get a ten year-old every time!
The movie is in fact set in a mining colony on Io, the third moon of Jupiter! A bearded Sean Connery from Never Say Never Again and The Hunt for Red October and Indiana Jones and the Last Crusade plays the newly-arrived Marshall in charge of policing the place! But, ha ha, he’s troubled first by the sudden departure of his wife and son, who don’t want to hang around such a gloomy depressing space colony, and then by all the workers who suddenly go banana-monster and expose themselves to the atmospheric pressures of Io, and inflate and then burst like ticks! Yikes! Turns out the nasty company, represented by bearded, golf-obsessed mine manager Peter Boyle from Walker, is feeding mind drugs to the workers, which makes them work harder but also fills their brains with cracklin’ bran! Marshall Connery’s only allies are his bearded deputy and an irascible doctor played by Frances Sternhagen from Misery, who isn’t bearded but may as well be! Ha ha!
So it’s a real beard-off, especially so when one of Connery’s allies proves inconstant! Eventually some hired killers come in on the shuttle and the movie settles into being a space-remake of High Noon! Like Coop, Connery stands virtually alone! It’s up to him to burst all his enemies (or else simply punch them out) and rejoin his family on their way to Earth!
Watching the picture recently, I was less thrilled with it than when I was ten! Ha ha, I guess that’s natural! But aside from the bursting people, which is still both funny and disturbing in equal measure, there’s not much about it that’s memorable! Some of the acting is fine - the scenes between Connery and Sternhagen are the heart of the movie, inasmuch as it has a heart, and Boyle mixes a fair tonic of ruthless and jocular, even if he isn’t on balance a very effective bad guy - but the characters are pretty thin paper, and the real concern of writer-director-possibly cinematographer Hyams seems to be showing off the many sets! Ha ha, even Mad magazine, which satirized the movie under what could only have been the title Outlandish, made this point!
It has its moments, but it really lacks a certain something - ha ha, let’s call it pep! I’ll always hold it close to my heart because of seeing it on the big screen at such a tender age, but there’s no particular reason you should embrace it! I give Outland two ill-advised gunshots!