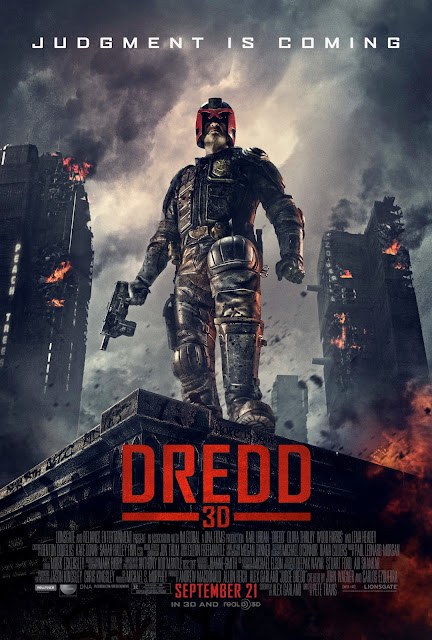 Ha ha pals, it’s Judge Burl, here to render judgment on the second attempt to dramatize the Judge Dredd funnybook stories for cinema screens! The first try, Judge Dredd, came in 1995, with good old Sly “Cobra” Stallone judiciously grimacing his way through the role! This one, Dredd, features a different actor scowling like Waldorf from beneath the headgear, though, ha ha, it hardly matters!
The 1995 version of the story was one of those candy-coloured sci-fi action pictures that take place in especially fake-looking, studio-bound environments! That’s a venerable Hollywood tradition dating back to Logan’s Run; other examples include Total Recall, Demolition Man and the Batman pictures from the 80s and 90s! The action is never very exciting in these movies for some reason, perhaps because it all seems terribly hemmed in by the studio environments and the shiny fakery which there abounds! That’s not to say these movies can’t be occasionally enjoyable, but they just aren’t pulse-racers, ha ha!
This Dredd tries hard to be grittier and nastier and more inventively gruesome than its forbear, and while it succeeds in this, it still isn’t very exciting! It’s one of those video game-inspired plots in which everyone is trapped inside a grotty high-rise and the heroes must fight their way from floor to floor until they get to the big boss for the final confrontation! Ha ha, just like Enemy Territory and The Raid! (The Raid, for the record, has more action-excitement in any one of its setpieces than Dredd manages in its whole 95 minutes!
Our hero is of course Judge Dredd (keeping his helmet on the whole time, unlike Stallone, ha ha!) and his sidekick is a lady psychic, who is a big step up from the puny wiseacre who was Stallone’s compadre! They must battle Ma-Ma, a scarfaced harridan who has made this particular mega-block her own private property! She rules it with an iron thumb, and her business is dispensing a mind drug which makes everything happen in slow motion! There are lots of scenes from the point of view of the people tripping on this mind drug, and to tell you the truth, they could have had a bit less of it, even though it looks sort of neat!
I’ll tell you this, ha ha: Dredd is a pretty violent picture, but though the violence, the grim atmosphere and the off-putting neo-fascism of its concept would seem to demand some leavening, or at least a wink or two somewhere, we never get it! Everything in the picture leads up to Ma-Ma’s final punishment, which is extended into a multi-minute sequence thanks to the slo-mo mind drug, and therein, I suppose, lies its entire raison d’etre! It’s not much to hang a big expensive movie on, really; but at least the trick effects are nice! Ha ha!
I won’t say I enjoyed Dredd very much, because I didn’t! I guess I wanted to see the villains get theirs as much as anyone, and that’s why I kept watching, but it really is a movie where the end credits start and you say “Huh!” in an affectless sort of way! I’m going to award Dredd one single big tall apartment building!
Posted by Burl at 11:12