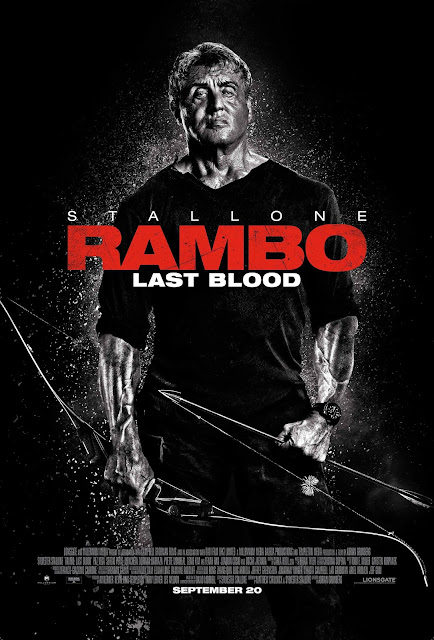 Hi there and welcome to oldster action! Yes, today we have some geriatric mayhem for you courtesy of Sylvester Stallone, well known from such pictures as Cobra and Cliffhanger and Cannonball, and even some that don’t start with C! This one for instance: it’s the latest, and maybe even the last (Friday the 13th: The Final Chapter taught me never to trust subtitles) of the entertainment series about a catastrophically damaged war veteran plagued every day by unending emotional torment, and won’t the voices in his head PLEASE JUST STOP?!?!?!?!? Ha ha, yes, I’m talking about John Rambo, and here is his latest psychotic adventure: Rambo: Last Blood!

I believe I’ve seen all of his previous cavalcades: the marvelous initial picture, First Blood, in which he only kills one person, and him by accident; the second picture, Rambo: First Blood part II, in which he became a Reagan-era superhero; the third one, Rambo III, the most expensive movie ever when it was made, in which he travels to Afghanistan and helps the Taliban with its self-actualization; the fourth, Rambo, tout court, in which we meet him again after a long absence to find him back in Vietnam, training snakes and machine-gunning evil soldiers into gobbets of bloody flesh; and now here he is again, having somehow become a horse rancher in Texas or Arizona or some such!

He’s assembled a little family too, though I never really figured out the specifics of the relationships! There’s an older lady who could be his wife, his girlfriend, his housekeeper or his nurse, or maybe just his roommate; and a young woman who calls him “Uncle John,” but who doesn’t seem to be his actual niece! Well, ha ha, whatever the actual link, the point is that he cares for these people, in his way, and when the girl, in defiance of pleas from both the woman and Uncle John, travels down to Mexico in search of her real father, she is immediately kidnapped by sex slavers! Of course it’s up to Rambo to go down and save her, which he does, but too late! This necessitates a vengeance vacation back to Mexico for Rambo, and then a visit from the remaining bad guys up to the horse ranch, which Rambo has equipped with tunnels and booby traps in case of just such an eventuality!

And that’s the plot! The first half of the movie is all lead-up, and the second half is largely mayhem! Border crossing is a non-issue: the bad guys have a tunnel, and Rambo simply drives his truck through the border fence whenever he crosses! The key selling point here is the violence, which is as over the top as it was in the previous picture! Ha ha, there’s a nasty scene where he rips out a fellow’s clavicle; another in which he bowls a guy’s head down the highway; and then, once the slavers arrive at the farm, there’s an array of pokings and blastings designed to offer catharsis to the casual xenophobe! And of course there's the grand finale: ripping out a man’s heart and showing it to him before he dies!

Stallone does his resigned, world-weary psychopath thing in such a way as to seem a parody of the type! The girl he was trying in his Travis Bickle-ish way to protect is punished so severely for her poor decision-making that she becomes not a human character but a kind of sad, hyper-manipulated symbol! As a drama, Rambo: Last Blood is unmemorable; as a piece of cinema, unremarkable; as an atrocity exhibition, unconscionable! As the rear bookend to the Rambo saga, it might as well be seeking to invalidate everything worthwhile about the first picture, and to undercut the heroics of all the others! And, as I’ve already hinted, it wants to be Taxi Driver, but the big problem there is that there’s already a Taxi Driver, which does the job of being Taxi Driver just fine thank you very much! Ha ha! I give Rambo: Last Blood one front porch rocking chair!