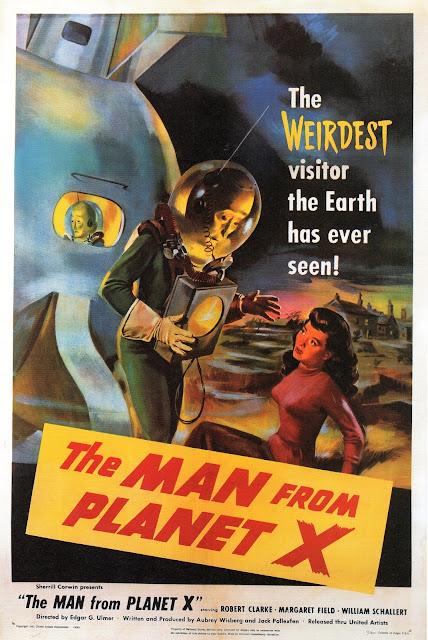 Attention Earthlings! It’s Burl here to review a movie about a most peculiar alien invasion! Ha ha, the picture is called The Man From Planet X, and it’s a production of that great dalyrimple Edgar Ulmer, director of Strange Illusion and of course the subject of Edgar G. Ulmer: The Man Off-Screen!
The Man From Planet X is mostly told from the perspective of a newspaperman sitting about the three-quarter mark in the story! Ha ha, do you understand what I mean? The picture begins with him writing his account of what happened on that fateful day (and never mind that he wasn’t around for a lot of it, ha ha!), and when he gets to the present moment of his narrative, the movie is still going!
The story is this: the newspaperman receives word from his friend, The Professor, that a rogue planet is going to come whizzing by the Earth, or maybe even hit it! The only place to be for this event is a remote Scottish island, which, according to The Professor’s calculations, is the nearest point on earth to where Planet X is going to whiz! Then an alien craft is sighted by The Professor’s daughter, and she also sees a crinkle-faced football alien, no taller than three bricks and a short refrigerator! The Professor’s nasty assistant, Dr. Mears (played by Joe Dante stock player William Schallert, known for his appearances in Gunslinger, Innerspace and Matinee, ha ha!), is interested in this, and would like to tear out every secret the spaceman has! And he does!
This is the kind of movie I like, with plenty of trudging around foggy, studio-bound moors, and a terrific model spaceship! The Man himself is a curious looking fellow: a homunculus with a giant oval head and squinty eyes! He doesn’t seem particularly threatening; and in fact this is the central question to the whole picture: what were his intentions? This is left up to the viewer to decide! We never find out, because the Man’s abuse at the hands of the nefarious Schallert gives the alien a pretty good excuse for acting hostile! His ultimate fate is therefore rather sad!
The great thing about the ending to the movie is the planetary swoop-by, rolling and tumbling over the astonished heads of the characters and causing a few rocks to be displaced! Sure, the special effects are of a rather low-budget nature and the falling rocks are stock, but that hardly matters because conceptually the scene is a genuine whiz-banger! It’s a terrific ending to a moody little bargain sci-fi pic, a picture about human nature as observed from without!
The movie is completely its own thing, which is a point much in its favour! The performances are strong, John “Psycho” Russell’s cinematography is low-budget luscious, and old Edgar gets his mild misanthropy plainly across! Altogether a fine little movie, and I give The Man From Planet X three too-easily-accessible breathing supply knobs!
Posted by Burl at 21:56