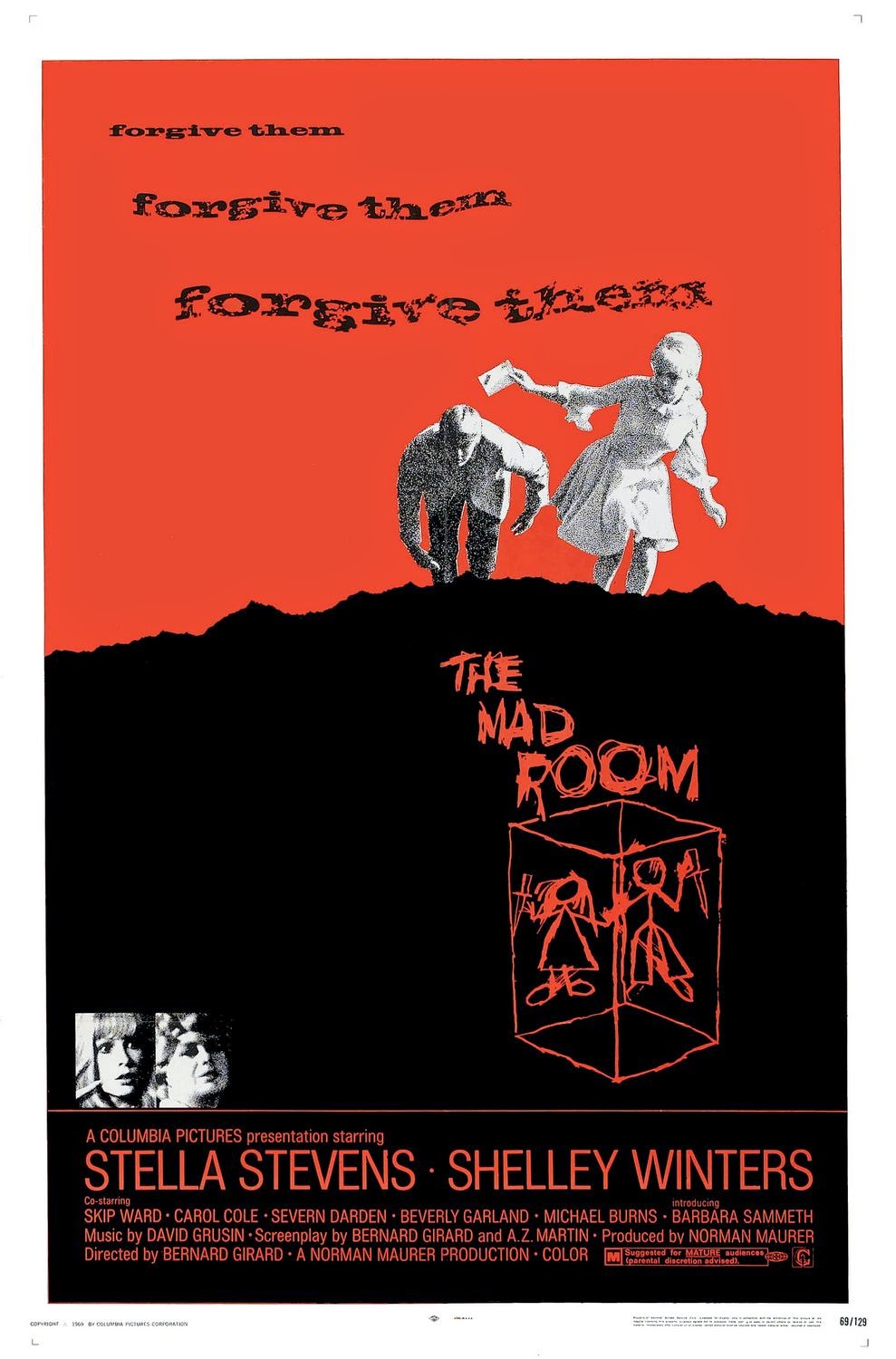 Good day, eh, it’s Burl! Ha ha, I’m here to review a picture made and very firmly set in the Great White North – a movie made in 1969 and known to all as The Mad Room!
Ha ha, I was pretty sure this was another one of your standard-issue batty-old-dame pictures, like the ones Curtis Harrington was making at the time! Whatever Happened to Aunt Alice and things like that! But although it has a similar look to those, and takes place in a big old rambling house, and features Shelley “The Visitor” Winters as not so much a batty old dame as a horny one, The Mad Room ultimately travels along a different path!
The picture, set on Vancouver Island, stars Stella “The Manitou” Stevens as Ellen, a young lady who works as some sort of companion or assistant to the massage-loving Mrs. Armstrong, played by Winters! She’s planning to get hitched to Mrs. Armstrong’s stepson Sam, and everything’s going along smoothly until she gets a letter from Toronto informing her that her younger brother and sister, both in their late teens, are ready to leave the bughouse, where they’ve been locked up for a dozen years after apparently committing a brutal double parricide! But which of the two actually did the foul but not entirely undeserved deed, no one can say, as the children themselves were too young to remember!
George and Mandy are a little weird, ha ha, but not alarmingly so – at least not at first! Ellen brings them back to Mrs. Armstrong’s house but tells no one about the real facts of the case! But the pressure of maintaining this fiction is to much for the youngsters, ha ha! And then there’s the mad room itself: the dedicated space these youngsters require in order to spend private time “working out their problems!” Ellen secures a forbidden attic room for this purpose, but when Mrs. Armstrong discovers this, and subsequently the truth about the kids and their dead parents, things take a turn for the bloody and soon a big wooly dog is carrying a severed hand around the house!
Ha ha, this story started life as a play, and when things slow down or stop entirely for some talky scenes, you can really sense the stagy origins! The central mystery doesn’t really make sense, since the kids weren’t quite so young as to be completely unable to remember what really happened all those years ago! So the premise is pretty shaky, but the execution is solid! Ha ha, director Bernard Girard, who gave us A Name For Evil only a year after this one, gets good performances from everyone, particularly Stevens and Winters! Stevens in particular has a lot of different stuff to do in the movie, some of it pretty over the top as is expected in a Gothic guignol, and she performs it all quite capably!
The cast includes a very welcome appearance from Beverly Garland, whom we know and love from Gunslinger and It’s My Turn, among many other movies, and here she plays a small but resonant part as a woman whose husband is always massaging everybody! Ha ha! Severn Darden from Vanishing Point and Back to School plays a construction boss, and I couldn’t for the life of me figure out the point of his character, unless it was just a way to get Severn Darden into the movie, which is reasonable enough; and the kids are played by Barbara “Stand Alone” Sammeth and Michael “Thumb Tripping” Burns!
Altogether it’s an okay little mystery picture, though outside of the scene with the doggy and the hand, it never gets as weird as one would like! No, ha ha, I can’t call it a memorable picture! But it’s good enough while it’s on, and because it’s got a fine cast working hard, I’m going to give The Mad Room two papers from Manitoba! Ha ha!
Posted by Burl at 16:07