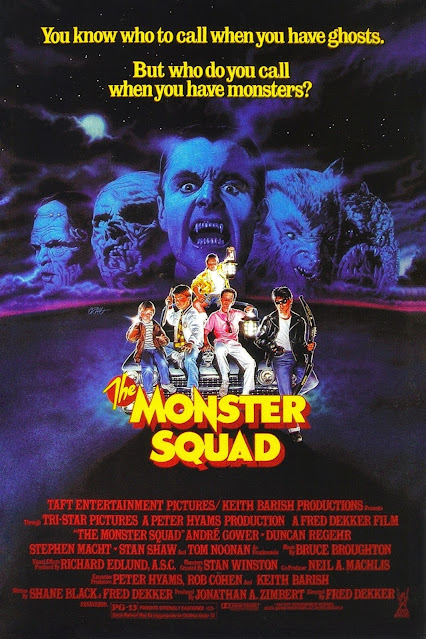 Ha ha and flapping bats, it’s Burl, coming your way with an all-new review! Now I’m a fellow who saw a lot of movies in the 1980s, and I tried to see just about every horror movie that came along, if I could! Ha ha, I even saw Jaws: The Revenge! But one movie I didn’t bother with was today’s entry, The Monster Squad, because it looked to me like a kids’ movie, and by the summer of 1987 I was simply too sophisticated for such nonsense! I was in the first maturity, the false maturity!

And in the intervening years I haven’t spent a lot of energy tracking it down, even though I was and am a big supporter of director Fred Dekker’s previous movie, Night of the Creeps! But for years now I’ve been catching up with pictures like this and watching them with my son, and this Halloween season was the right time to finally watch The Monster Squad! I’ll admit here and now that I was fearful of a Goonies-style scream-fest, with kids talking like particularly loutish adults and plenty of insults for the portly!

And to a degree, that’s what I got! But in this tale of horror-loving tweens battling real Universal monsters (or as close to that as the Universal legal department would allow, given that this is a Tri-Star production), I also got some idea of why the movie is so beloved by people just a few years younger than me! The horror passion on display is genuine and convincing, and extends from the characters to the movie itself! Ha ha, that goes a long way with this viewer! And the portly child Horace, played by the late Brent Chalem from Moving Violations, who is called “fat kid” even by his supposed friends, gets the kind of validation never given to Chunk in The Goonies!

The kid actors are okay, with the weakest of them probably being the one who plays the lead, Sean! Sean’s cop dad, played by Stephen Macht from Nightwing and Amityville 1992: It’s About Time, and his mom, played by Mary Ellen Trainor who was in Die Hard and also played the mom in The Goonies, are having marital problems, and that part of the movie is a drag, but it doesn’t take up much screen time! The monster actors are pretty good - there’s a Frankenstein Monster played by the marvelous, towering Tom Noonan, celebrated from his appearances in Wolfen and F/X; and a werewolf played by King Vidiot from Joysticks, Jonathan Gries! I wasn’t such a fan of the movie’s Dracula, though - he seemed too posh and uncommitted to his evil most of the time!

Leonardo Cimino from Dune as the Scary German Guy, who is in fact an affable concentration camp survivor, is a delight, but unfortunately there’s an irritating performance from Stan Shaw, an actor I usually like in pictures such as Truck Turner and Snake Eyes and Daylight, as a perpetually sarcastic cop who gets blown up by Dracula! On the backside of the camera, Dekker does a fine job of keeping things moving, and makes sure the kids have an awesome treehouse of horror to hang out in! I wasn’t a big fan of the way the picture looks pictorially, though - the wide screen was a good choice, but the cinematography seemed too bright to me, not evocative of the Germanic look of the Universal pictures! Ha ha, that would have been nice!

The monster designs and makeup are almost all great though, the exception once again being Dracula, who looks like a local actor in a dinner theatre production of the Deane/Balderston play! And there’s some fine carnage for an ostensible kids’ movie, and plenty of adult-ish talk too! It was pretty enjoyable, but frankly no Night of the Creeps! But it was no Goonies either, and for that we can all be grateful! I give The Monster Squad two Return of the Living Dead movie posters!