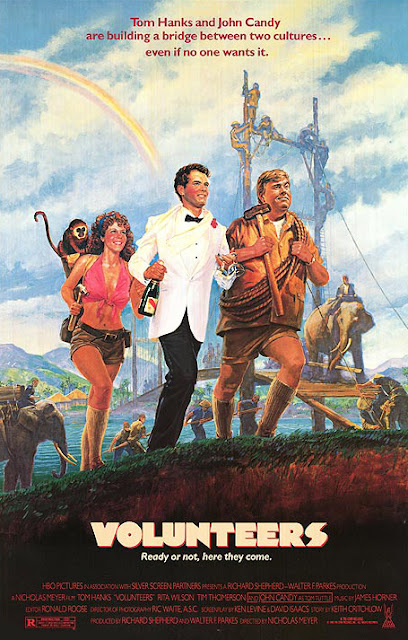 Good day campers! It’s Burl here with a bit of mostly forgotten 80s comedy that features some of the great stars of that period, ha ha, including such ringers as Tom Hanks from Dragnet and The Money Pit and John Candy, well known from Armed & Dangerous and The Great Outdoors! So how could a comedy movie with this sort of pedigree have been forgotten after only thirty-seven years? Well, mainly because it’s not very funny! And nobody went to see it in the theatre except me I guess, so there you go! The picture’s called Volunteers!

I still remember the experience of going to see it! It came out near the end of the summer (which might also help explain why it didn’t do very well), and just a day or two before I was to start my first day in high school! I recall feeling exactly neutral about it: it didn’t made me laugh, but I still derived some enjoyment from it, thanks mainly to the estimable Mr. Candy; and it mitigated that mild end-of-summer depression, which was the goal!

Well, I watched it again recently and it hasn’t improved much! Candy’s still good though, and it has a few bits I probably understand better now than I did then; and it still somewhat mitigates the anxieties of today’s world, which, ha ha, is the goal! It’s set in 1962, and Hanks plays a toffee-nosed fauntleroy just graduating from Yale and with all the attendant boorish manners thereby accorded; he’s a young man of privilege, a bounder, a snob, and a heavy gambler! He owes a chunk to his bookie, Allan Arbus from Damien: Omen II and The Last Married Couple in America, and if he doesn’t pay, Arbus's henchman, Ji-Tu Cumbuka from Out of Bounds (who had previously menaced Hanks in Bachelor Party, ha ha), will put a terrific pounding on the dinner jacketed lad! His rich dad, the ideally cast George Plimpton from L.A. Story, could help him out, but won’t!

The next thing you know, thanks to his roommate Xander Berkeley from Tapeheads, Hanks, or Lawrence Bourne III I should say, is on a Peace Corps plane overseas in the company of an amiable can-do character called Tom Tuttle from Tacoma, played by Candy of course, and a non-naïve idealist played by Rita Wilson from The Day It Came To Earth! “So this is hell,” moans Bourne! Peace Corps organizer John, played by Tim Thomerson from Zone Troopers, refuses to help send Bourne back, and so off he goes to the little Thai village with Wilson and Candy, where they are to build a bridge, and where the only fellow who can speak English is Gedde Watanabe from Vamp and Gremlins 2, and where in any case they don't want a bridge!

Others do, however: the local Communist soldiers for instance, and of course a drugs warlord played by Ernest Harada from Dreamscape, and a soon-to-be-revealed-as-maniacal Thomerson! Intersecting the story here and there are various characters played by such marvelous utility Asians as Clyde Kusatsu from Gimme an ‘F’, Professor Toru Tanaka from The Running Man, and Harry Yorku from Summer Rental! You’ll notice that none of these folks, as appealing a bunch of screen presences as they are, are even faintly of Thai extraction, but that’s how this movie rolls! After all, ha ha, it was shot in Mexico!

And it’s not terribly good! What it lacks most is pep, comedy pep! Maybe it’s just that Nicholas Meyer is not really a comedy director, though he managed some appealing lightheartedness in Time After Time! (I haven’t seen his other comedy, Company Business, but, ha ha, reports are not good!) Still, Ernst Lubitsch himself would have had trouble wringing comedy out of this script, which seems to put “laffs” about third or fourth down its list of concerns!

Another complaint: the period setting was every bit as convincing as the Thai locations, which is to say not much! The styling, the dialogue, the attitudes: everything seemed slightly off from where it should have been to place us firmly in the Kennedy era! And yet there are enjoyments to be had in the picture, and these, as earlier intimated, come mainly from the gangbusters cast! It’s too bad Candy gets kidnapped and brainwashed by Communists, and therefore drops out of the movie for a large chunk! At any rate, it’s probably not the worst thing either Candy or Hanks were involved with in the 80s, and there are bits and pieces I liked, so I give Volunteers one and a half college fight songs!