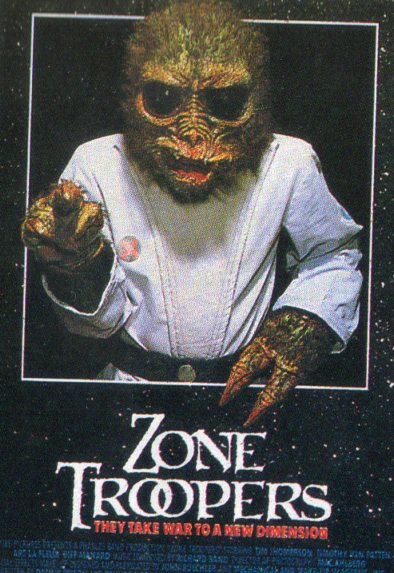 Hi, ha ha, it’s Burl to review one of those Charles Band productions from the 1980s! I actually saw a few of these things in the theater if you can believe it, pictures like Ghoulies, The Dungeonmaster and of course Metalstorm: The Destruction of Jared-Syn! Looking back it seems incredible that such cheeseball little movies ever saw the light of a cinema projector, but these were different times!
I don’t know what sort of theatrical release Zone Troopers got, but I don’t think it ever made it to my neck of the woods! I didn’t even bother catching it on video ever, so when I recently spied a VHS copy for sale in a Times Square video shoppe – ha ha, I was just there for the regular movies, I swear! – I snapped it up! (Turns out the movie just got some kind of on-demand DVD release or something, so maybe that’s why someone dumped their VHS!)
It’s a WWII story, set in Italy in 1944 during the hard-fought Allied campaign up that benighted peninsula! There’s a big Wehrmacht assault at the beginning which thins the squadron of Yanks down to four: The Sarge, Mittens, Joey and a newly-arrived war correspondent named Dolan! This is pretty much our cast for the rest of the movie, though there are some Nazis (with a special appearance by Hitler, ha ha!) and some aliens. And of course there’s the main alien, who’s been trapped by the Germans and who looks like a mime with the head of a spider! And he eats cigarettes for dinner!
The doughboys save him and manage to reunite him with his alien friends (who don’t have bug heads, but certainly possess frosted tips), and they get some help in vanquishing the Wehrmacht! Not all of these old boys make it through the adventure, though, so the ending is bittersweet!
This movie is pretty beloved in some circles, and I guess it has a nice pulpy feel, a modicum of ambition and a little more wit and intelligence than your average cheap programmer! Certainly it outdoes most of the other Empire pictures of the day! I was prepared to really like Tim Thomerson’s performance as the Iron Sarge, since he’s perfect for the role and also is someone I’ve met and hung out with, and who was a nice guy, very funny! But he overdoes the squarejaw routine here, and his performance is pretty lifeless, never conveying the legendary aura the Sarge is clearly supposed to have!
I actually preferred the performances of the guy who played Dolan, the correspondent – he was a doughy middle-aged guy, but he had an appealing surfer’s drawl that I thought fit the part well! You believed he might be a writer! The fellow who played Mittens was good too, and the scene where he slugs Hitler in the jaw is pretty delightful! The alien, meanwhile, is kind of forgettable, and not a terribly good trick effect! It was created by John Buechler, but it’s no Cellar Dweller, ha ha!
The movie’s certainly not unenjoyable, but there’s not that much to it! It’s hard to rate a movie that rises above expectations but falls short of possibilities, so I’ll just give it two Kilroy drawings and leave it at that!
Posted by Burl at 23:26