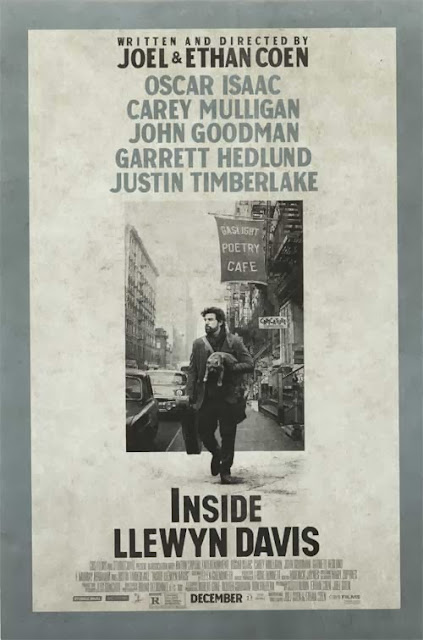 Dear Mr. Kennedy, it's Burl here! Please don't fire me into outer space! Ha ha, good day friends: I’ve got a review of the folktastic new picture from the Coen Brothers for you! Yes, I’ve enjoyed their photoplays for as long as they’ve been making them, and I believe there’s only one I have yet to see: Intolerable Cruelty! I’ll watch it at some point of course, but for now I’m here to chat about Inside Llewyn Davis!
It’s the simple story of an irascible folk performer and his adventures in and around Greenwich Village in February of 1961! This irrepressible beardo mingles among, ingratiates himself to, outrages, impr*gnates, heckles and disappoints a variety of Village denizens played by the usual great gallery of Coen faces! Ha ha, the terrific supporting cast includes John Goodman of course, whom we know from C.H.U.D., Matinee and many other Coen Brothers pictures, as well as Adam Driver from Frances Ha, Sylvia Kauders from Armed and Dangerous, F. Murray Abraham from The Big Fix and Jerry Grayson, whose last movie this was, and whose first movie was Wild on the Beach!
For the most part these people are new to the Coen oevre, but such is their timeless appeal that they seem to have been imported en masse from their previous work! The elevator operator, for instance, may as well be the elevator operator from Barton Fink!
Llewyn Davis himself is played by the talented Oscar Isaac from The Force Awakens, and the picture follows him around for about a week and a half as he bumbles about committing acts of self-sabotage, and trying his best to keep hold of an orange cat who looks a lot like Jones from Alien! (And a lot of people forget this, but Jones also makes a cameo in Aliens!)
I’ll tell you what stood out for me while watching this picture: the absolute rock-solid confidence with which it was made! Ha ha, these are craftsmen, and no mistake! There are no camera tricks here – no tracking down plug-holes, for instance – and indeed very little camera movement! As they occasionally do, the Coens had to use a different cinematographer than their usual genius lensman, Roger Deakins, because apparently he was off shooting Skyfall! But the fellow they got instead, Bruno Delbonnel, did an extremely creditable job!
The usual plot beats and narrative organizers are absent here, but are not missed, as we get instead a pleasantly folky forward momentum! Llewyn’s saga is as sad-sack as that of any folk-song protagonist, as his baleful glances toward the off-ramp to Akron will attest! But because it’s a Coen brothers picture, it can’t help but give some laffs too!
It’s a hugely enjoyable movie, and might place somewhere in the top half of their filmography, if I were a list-rating man! And that’s certainly high praise from ol’ Burl! I give Inside Llewyn Davis three and a half corduroy jackets!
Posted by Burl at 23:10