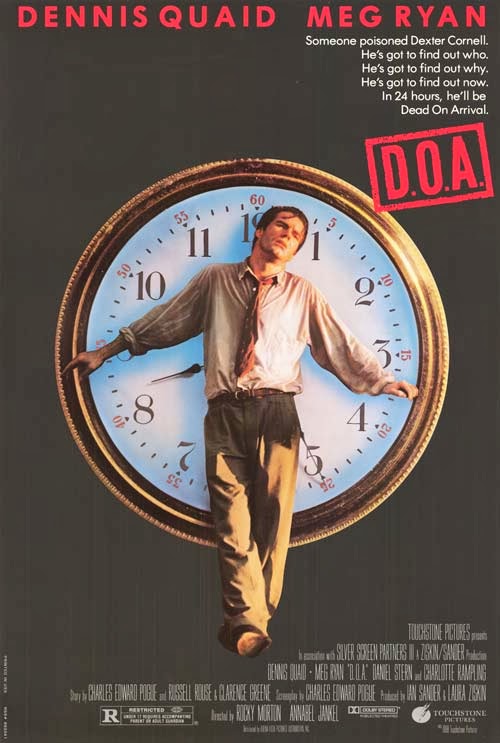 Hi, it’s Burl here again! I’m reviewing a picture I saw in the theatre back when it was released in the spring of 1988, and I’ve got to tell you, ha ha, I have no idea why I would have bothered! There are a few pictures in this category, like I Love You To Death, The Presidio, Gung Ho, Hook, Howard the Duck, Stanley & Iris, Green Card and Volunteers! All of these I saw on their original runs in the theatre, and why would I have decided on these and ponied up my hard-earned samoleans for them? Ha ha, who knows! Probably because of ladies!
The particular picture I’m talking about is D.O.A., a remake of a fine Edmund O’Brien picture from the 50s! The only reason I can think of for going is that I felt like seeing something on the big screen, and my only alternatives at that time were movies like Switching Channels, Moving, Vice Versa and Police Academy 5: Assignment Miami Beach! Bleah, ha ha!
D.O.A. features the grand reunion of Dennis Quaid and Meg Ryan from Innerspace! Ha ha, Quaid plays Dexter Cornell, a professor of literature at some unnamed college, and he’s the same sort of guy we saw in ‘Salem’s Lot: the once-promising writer with three acclaimed if uncommercial books to his credit, who along the way has lost his muse! But he has another stock character in his orbit, the young student with a yet-unpublished book of unparalleled genius!
But the student plummets from the top of the building, and soon D.O.A. plays its only decent card: the gimmick of the protagonist being poisoned and trying to find his own murderer before the slow-but-not-slow-enough-acting toxin finishes him for good! Then his ex-wife is fatally bonked on the head, and before you know it, two cops played by Brion “Blade Runner” James and Jack “The Wild Life” Kehoe are on his case, calling him a dirty, no-good murdering so-and-so!
Then there’s a bunch of crazy malarkey involving Charlotte Rampling and her family troubles, and this ties in with the dead student, but – and I don’t want to spoil anything here, but – it actually has nothing to do with anything, and the bewilderment of all the characters when they realize this is actually pretty funny! Meanwhile Daniel Stern, well-known from Get Crazy, plays a character who seems to have little narrative function, and, ha ha, you know what that means!
Where does Meg Ryan fit into all this? She plays another superfluous character, a person so ephemerally unnecessary to the plot that she must be superglued to the hero in order to keep her around! Ha ha, I guess she was supposed to be an audience surrogate, or maybe just another red herring, but since she was America’s Sweetheart at the time, nobody would have thought she might be the culprit!
The picture was made by the people who brought us Max Headroom, a show I never watched! They also made Super Mario Bros., a video game picture I’ve never seen; and after this, evidently, they hung it up! On the evidence of this picture they clearly fancied themselves stylists, but I have to call bushwa on that, ha ha! They’re remaking a film noir, so we get lots of venetian blind shadows (the sort where you can practically see the shadows of the C stands holding them up as well) and people sweating a lot and constantly talking about how hot it is even though it’s Christmas!
In sum, this is not a very good picture! Why did I see it in the theatre? Ha ha, the real question is why did I watch it again! I give D.O.A. one nail gun that somehow fires like an AK-47!
Posted by Burl at 23:49

Email ThisBlogThis!Share to TwitterShare to FacebookShare to Pinterest
Labels: 1980s, Christmas, mystery, saw it on the big screen, school, suspense