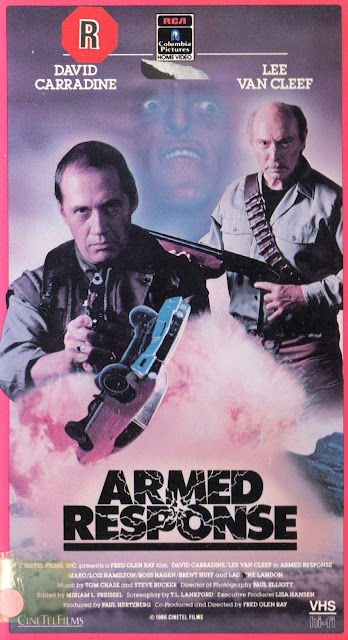 Ha ha, bang bang bang, it’s Burl! Yes, I’m here to review an action picture for you, but it’s not quite in the league which I refer to as Ridiculous Action! You remember this microgenre, I’m sure – movies like Deadly Prey, Young Warriors and Raw Force are all charter members! Today’s picture, Armed Response, dips a toe into that arena, but never wholeheartedly commits, despite it being a Fred Olen Ray movie! Ha ha, he’s the fellow who made Evil Toons after all, so when Fred is behind the camera, all bets are off!
The one thing you can usually be sure of in a Fred Olen Ray movie is a sterling cast of Hollywood timers both old and new! This one delivers in spades: we have David Carradine, Lee Van Cleef, Mako, Michael Berryman and the great Dick “Bucket of Blood” Miller! There are also such huckleberries as Laurene Landon from Roller Boogie, Ross Hagen from Night Creature, Bobbie Bresee from Mausoleum and Burr De Benning from The Incredible Melting Man! Wow, it hardly gets better than that! You may or may not like the Olen Ray touch (I’m middling on it myself), but you can’t argue with his casting!
Lee Van Cleef is the crusty paterfamilias of an entire brood of Vietnam vets! Carradine, his oldest boy, suffers from regular ‘Nam flashbacks in fact, which seem borrowed from some other, even cheaper movie! The other two sons are younger, and seem perhaps a little too young to have participated in that particular conflict, but oh well! Lee seem like the kind of dad who might have taken his twelve year old twins to Southeast Asia in his suitcase if he had to, just to give them a chance to gun down some people of Asian persuasion!
They get to do so as a family once again when trouble comes knocking in the form of a deal gone bad! It seems Mako wants a certain ugly little statue for some reason, and one of the Van Cleef sons has hooked up with a crooked partner to do a deal with Dick Miller to get it! I have to admit, if the details of this transaction were provided, I missed them somehow! Anyway, the crooked guy acts as crooked guys do, and the next thing you know Dick Miller is lying on the ground, his red crushed velour suit filled with bullet holes! Dick’s tall blonde partner is shot as well, and Number Three Son also catches a gutful of hot lead!
The Van Cleef family is not pleased about this, so they plan a response – ha ha, and I’ll bet you can guess what kind! The next thing you know, Number Two Son has fallen into Mako and Michael Berryman’s hands and receives the same needle treatment we saw in that Takashi Miike film Audition! Ha ha, iki iki iki! “Once again, the nefarious yellow man is torturing the good, righteous American,” says Mako, as though stating the movie’s theme!
It’s funny to see this level of Asian-o-phobia in a relatively modern movie! Ha ha, Mako might as well be Fu Man Chu the way he’s treated in the script! I guess Armed Response might make a good double feature with the similarly West vs. East action cheapie Steele Justice, but that might be a little too much brown-bashing for one night for a guy like ol’ Burl! Ha ha, I’m a peaceable sort who wishes we could all just get along!
Anyway, Armed Response has that great cast, and it’s got some pretty good car stunts and action bits too, but it’s also pretty conventionally plotted and slightly deficient in action! Well, I guess you can’t get it all! For Dick Miller alone I could give this a pretty high rating! I think I’ll temper my fandom for the nonce and award it an even two fearsome Berrymen!
Posted by Burl at 23:07