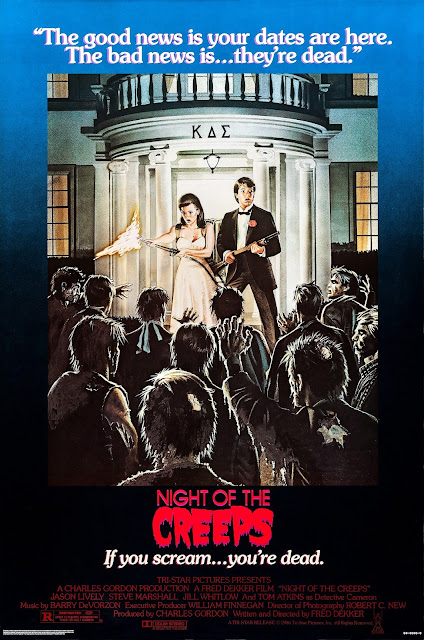 This is Burl - ha ha, thrill me! If you’ve seen the movie I’m discussing today, you’ll know what I mean by that, and if you haven’t, well, you should! I myself saw it in the theatre, though I had to sneak in because I was several years too young according to the rules in my neck of the woods; but, as with Evil Dead II, Day of the Dead, Creepshow 2, A Nightmare on Elm Street 3, and several others, I successfully broke these rules, and therefore hold some extra fondness for the picture I might not otherwise have! Though I’d probably be pretty fond of it in any case, ha ha! And the picture? None other than Night of the Creeps!

Sure, I saw it on the big screen, but I had some friends who managed to catch it at the drive-in, and I was a bit jealous because that would be the absolute perfect venue for a movie like this! And, ha ha, the movie knows it, which is part of its charm for the horror fan! It was the first effort of Fred Dekker, who later made The Monster Squad, and he’s the sort of guy who, having been struck by the idea of naming all his characters after horror directors, commits to it one hundred and fifty percent!

The picture opens in a spacecraft populated by naked munchkins, then continues with a sequence set in the late 50s and shot in luminous black-and-white! Ha ha, this part involves Sorority Row, Lover’s Lane, and an escaped axe maniac, and features a marvelously sinister use of The Stroll, that old song by The Diamonds! And then, finally, we segue into the present day on the campus of good old Corman University! We meet our protagonists: a pair of misfits named Chris Romero, played by Jason Lively from Brainstorm and European Vacation, and James Carpenter-Hooper, or J.C., played by Steve Marshall from… well, ha ha, I don’t know what he’s from!

As they walk around the campus Chris spies Cynthia Cronenberg, essayed by Jill Whitlow from Porky’s and Weird Science, and falls instantly in love! This leads to a prank attempt at the behest of some frat bros led by Allan Kayser from Hot Chili in the role of Brad, and this in turn results in the release of the space slugs that had been accidentally created by the munchkins! And of course here is where Detective Ray Cameron, played by the unstoppable Tom Atkins from The Fog, Halloween III and Creepshow, takes center stage!

From here things swiftly go magoo as a busload of frat bros become slug zombies, innocent pets are possessed by the otherworldly leeches, the axe murderer returns from the grave, the two gomers who started the whole thing, along with their sorority sister friend, make themselves variously martyrs or heroes, and Atkins repeatedly places demands on people to "Thrill me!" But the important thing to note is that while we get some familiar faces in the cast, like David Paymer from City Slickers and Robert Kerman from Cannibal Holocaust and many a pornoo, we also are blessed with a cameo appearance from the terrific, the one-and-only Dick Miller, well known from pictures like Apache Woman and Explorers! Yes, it’s a gratifying appearance too, with Miller as a police armorer coerced into giving Atkins and Lively a flamethrower with which to battle the space slugs! Ha ha, how marvelous! How truly Miller!

I’m well aware of this picture’s flaws: the lapses of logic, the dog’s breakfast narrative, the weak characterizations, the my-first-movie directing, the sometimes dicey acting, the sophomoric though not inapt move of naming all the characters after horror directors! But, ha ha, very little of that bothers me, because even today, after all these years, I find the movie tremendously enjoyable! The humour is generally well-judged, the trick effects look good, the central friendship is heartwarming, and Atkins and Miller provide all the thespian firepower you could want! It was great fun to see in the theatre when I was fifteen, and it thrills me to this day! I give Night of the Creeps three monobrows!
Posted by Burl at 22:27