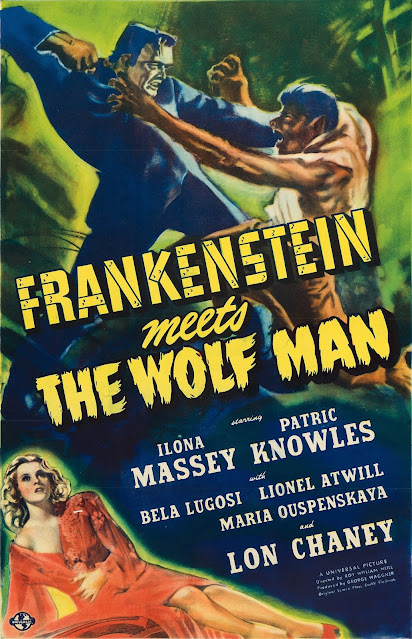 Ha ha and arooo, by the light of the full moon it’s Burl, here to review some Universal monster horror! This isn’t the best of the run, but it’s far from the worst, and like any of them it makes for some fine October viewing! The name of this picture is, and could only be, Frankenstein Meets the Wolf Man!

It serves more as a sequel to The Wolf Man than anything else, though by the end it plays as a standard Frankenstein picture! Our man Lon Chaney Jr., known from My Favorite Brunette, is the constantly anguished Larry Talbot, who, as the picture begins, reposes peacefully in his grave, not bothering anyone! In a striking sequence marvelously directed by Roy William Neill, who also brought us the delights of The Scarlet Claw, two foolish grave robbers decide to pilfer the Talbot family crypt, and on the night of the full moon no less! Ha ha, these two miscreants are soon weeping copious tears as the hirsute terror revives himself and goes full wolfman! (An interesting trivia is that one of the robbers is played by Cyril Delevanti, who later appeared in pictures like Son of Dracula, The Night of the Iguana, and Oh Dad, Poor Dad, Mamma’s Hung You in the Closet and I’m Feelin’ So Sad, played Johnnycake Jones in the Hudson’s Bay teleseries, and ended his career in Jack Arnold’s blaxploitation picture Black Eye, playing a character called Talbot! Ha ha!)

A hapless Welsh constable catches a fatal wolfmanning as well, and then Larry is found dazed and confused and human again, and having no idea how he ended up sleeping rough on the streets of Cardiff! He tracks down Maria Ouspenskaya, the old Gypsy woman whose son Bela put a biting on Larry in the first picture and turned him into a werewolf, but all she can do is point him in the direction of a certain science doctor she knows of! Well, of course this is Dr. Frankenstein, but when Larry arrives at the castle, he discovers two astonishing things: one, the doctor is dead; and two, the Gypsy woman’s son Bela, thought dead, has somehow been transformed into a Frankenstein Monster, and is reposing in an ice cave beneath the ground!

Of course Bela, the new Frankenstein Monster, is played by the great Bela Lugosi from Island of Lost  Souls! Replacing the departed doctor is a new doctor, Dr. Mannering, played by Patric Knowles from Another Thin Man! He quickly becomes obsessed with the secrets of life and death, which alarms Frankenstein’s daughter, Baroness Elsa, while down in the town the mayor, Lionel Atwill from Night Monster, tries to keep the increasingly anxious townspeople from lighting up their torches for a mob run up to the castle!

Ha ha, this mob is headed by the local malcontent, a large gentleman with a fulsome walrus moustache and a delightfully modern taste in shirts, who’s played by Rex Evans from Midnight Lace! And his gang includes the great Dwight Frye of Dracula fame! It all comes to a head just as Frankenstein Monster and the Wolf Man are finally throwing down for their climactic monstero-a-monstero, and while I won’t tell you who wins, I will say that the results are inconclusive thanks to a great wall of water unleashed by the constantly grousing Evans!

The bald fact is that if you like Universal monster movies, you’ll like this one, because it’s got just about everything you could hope for from the form! It’s a bit scary, a bit silly, and suffused with backlot atmosphere, and the tone does get a bit grim with Larry Talbot's constant hankering for the sweet release of death! This was the first of the monster-mash pictures, but not the last, and of course eventually the comedians would get involved and we’d have such works as Bud Abbott and Lou Costello Meet the Killer, Boris Karloff! But at this point they were still trying to be scary, and they halfway succeeded! I give Frankenstein Meets the Wolf Man two and a half ice windows!