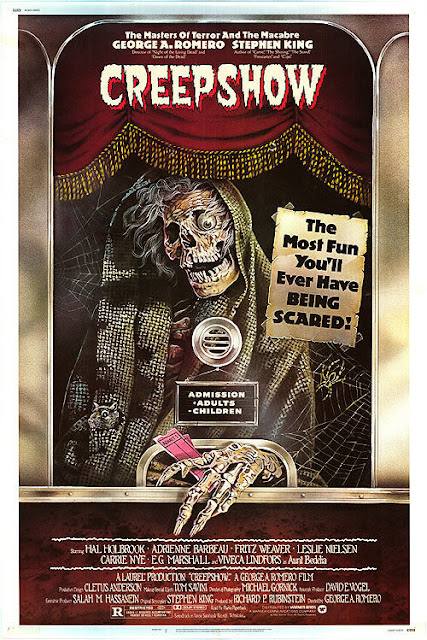 Hi, Burl here to review a movie I’ve always kind of liked but never completely loved! Yes, it’s Creepshow, ha ha, how did you know? Or should I say Bwa-ha-ha?
Anyway, though I may feel it failed to achieve greatness, the picture nonetheless fits very well into that strong year of genre filmmaking, 1982! Whether you were the exact right age that year, as I was, or not, it must be acknowledged as something special for movie viewers! Certainly Creepshow was pushed as itself something special: this triad of terror titans, Romero, King and Savini, conspiring to petrify us in one pulse-pounding portmanteau!
So it couldn’t ever have been anything but an enjoyable if mildly underwhelming bohankie, but I nevertheless had the poster tacked with pride on my teen bedroom wall! It’s a comfort movie I suppose! And though it’s a Halloween picture through and through – it was originally released in the late fall, and of course it has the bookending scenes involving pumpkins and comic books and little badactor Joe King (who I understand has since found his true calling as a writer like his old man) and good old Tom “Halloween III” Atkins as the nasty dad – I think of it more as an early summer movie because of its first story, “Father’s Day!” Ha ha!
Yes, that’s the one with the great Viveca Lindfors, whom we know from Exorcist III and Silent Madness! It’s also got Ed Harris in there of course, and Carrie “Too Scared To Scream” Nye, and Jon Lormer from the boo-boo-Boogens, and an ambling corpse who uses corpse magic to crush Ed with a gravestone!
The next story involves Stephen “Maximum Overdrive” King himself, playing an overalled clod who finds a meteor and turns into a moss! After that is a tale of watery revenge, where we get Leslie “Four Rode Out” Nielsen planting Ted “Body Heat” Danson and Gaylen “Madman” Ross in the beach, then gibbering as they come shambling back for him! Ha ha, I’ve always liked the beach atmosphere in this one!
After that comes probably my fave of the bunch, “The Crate,” where janitor Don “The Car” Keefer finds a box with an ape monster in it, and after he and Fritz “The Big Fix” Weaver open it up, there’s a mild rampage! The janitor, a young brain wizard and the world’s most unpleasant woman, played by Adrienne “The Fog” Barbeau (who in real life is an extremely pleasant woman) are all munched down without delay! Finally we experience a nasty millionaire with a cleanliness fetish, played by E. G. “Christmas Vacation” Marshall, who experiences the worst sort of bug-out! Ha ha!
So there’s a lot going on, and it’s all pretty entertaining, if never very scary! Certainly, however, this is streets ahead of its poor sequel, Creepshow 2; word has it there’s even a third picture in the series, but I feel it might be wise to stay far away from that one! The original, with its funny colours and strange cast of stars, is clearly the way to go! I give Creepshow two and a half glazed hams!
Posted by Burl at 22:21