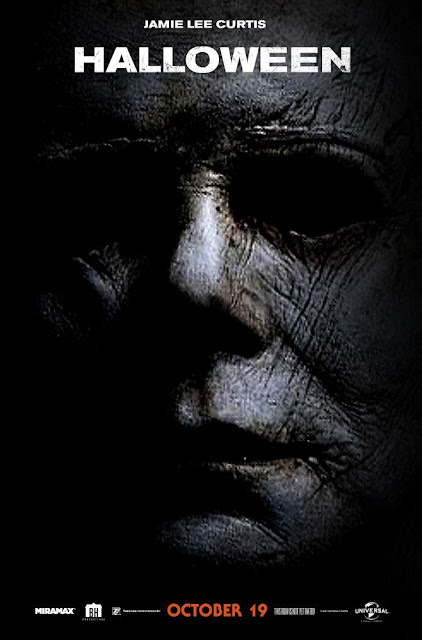 Ha-ha-ha, ha-ha-ha, ha-ha-HA-ha, it’s Burl, laughing the famous Halloween theme tune for you! And I know what you’re saying: “Ha ha, Burl, haven’t you already reviewed Halloween?” Yes I have, but now I’m reviewing the recent remake of that picture, or actually more of a belated sequel: the 2018 picture known, like its inspiration, simply as Halloween!

This new picture was directed by David Gordon Green, who brought us Prince Avalanche, and the idea here is that every other sequel, including Halloween II, Halloween 4, Halloween 5, Halloween: The Curse of Michael Myers, and any other sequels there might be, are completely ignored! Halloween III: Season of the Witch, being as it’s a story that has nothing to do with Michael Myers or Haddonfield, is not necessarily being ignored - ha ha, we just don’t know one way or the other! And as for those Zombie ones, well, I haven’t seen them, but I detected no references to them in this picture!

Jamie Lee Curtis, whom we know so well from Prom Night and Grandview U.S.A. and so many others, is of course once again Laurie Strode, and, as in Halloween H20 (the existence of which is, naturally, also ignored), she’s a jumpy, paranoid mess as a result of her terrible experience from her days as a babysitting teen! Now though, instead of channeling her fear and rage into running a private academy for jerks, she has become a doomsday prepper with a house full of guns and alarms and locks and bolts and bars! She has installed such survivalist accouterments as a gun cubby and a swivel counter, and has made sure her house is fitted with louvered closets so she can re-experience the trauma of her babysitting days any time she chooses! Ha ha, she reminded me a bit of Rambo in his final adventure, Last Blood!

Between installing floodlights and target shooting at mannequins, she has found the time to have a daughter, played by Judy Greer from The Descendants and Jurassic World! But her paranoid ways have driven her daughter away, and Laurie’s penchant for wine-guzzling and angry non-sequiturs even have her granddaughter, a teen who calls Laurie “grandmother” as though she were addressing Mrs. Manson Mingott from The Age of Innocence instead of Laurie Strode from Halloween, looking at her a bit askance!

But what about Michael, you ask? Well, he’s been in an institution, standing on a checkerboard floor and attended to by another crazy doctor now that Loomis is long gone! The new headshrinker is Haluk Bilginer from Ishtar, and his idea of therapy is to let a pair of dimbulb podcasters approach Michael on his checkerboard floor and dangle the old Shatner mask in front of him! Ha ha, of course these podcasters are made short work of once Michael escapes his checkerboard and heads back to Haddonfield!

Will Patton from The Puppet Masters plays the local lawman, and there are other assorted victims or potential victims wandering around the town! Michael enjoys a little welcome-home killing spree once he arrives in Haddonfield, which we the audience mainly observe from outside the windows! It’s a pretty effective sequence! Meanwhile, Laurie, her daughter, her granddaughter, and the good-time comedy slaphead dad who seems like a holdover from more lighthearted David Gordon Green projects, are all arguing about whether Laurie is too paranoid or not paranoid enough; and Michael, who is emphatically not related to Laurie this time around (phew!) nevertheless seems to have some kind of Laurie Strode homing beacon implant which has him on a steady course toward the strapped granny’s security castle!

Head-bashing is Michael’s favored killing method this time around, frequently with messy results! Even Laurie catches a bonk, though a non-fatal one! Yes, there’s significantly more grue than in the original picture, which features approximately zero Special Makeup Effects but is a far superior movie nevertheless! I think that should go without saying, but after all, this is a movie review, ha ha, so critical comparisons like that are part of the game! This new one isn’t the worst potato on the block though - it’s entertaining enough, and does a fine job of making Michael a primal force of evil and all that, but it never does manage to bring us that skittering-leaves October atmosphere the original provided so satisfyingly, even though it was shot in the summer and on a much lower budget!

It’s always a pleasure to see Jamie Lee Curtis on screen though, and I appreciated that they kept it reasonably simple and didn’t try to add family connections, cult antics, or supernatural mumbo-de-jumbo! I give this newest Halloween two dollops of peanut butter!