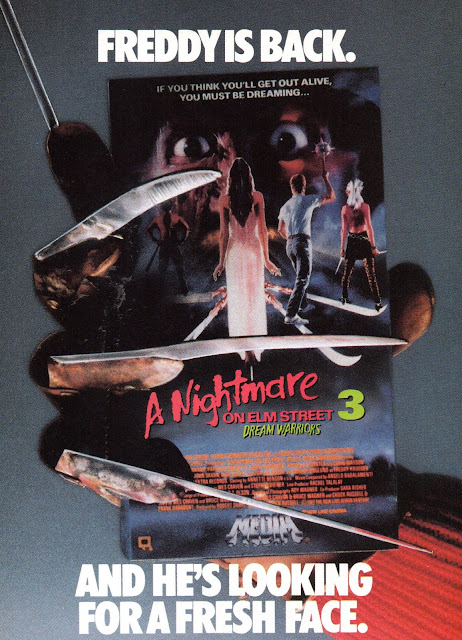 Ha, and again I say ha! It’s Burl! Yes, I’m here to review another picture for you, and this time I thought it ought to be A Nightmare on Elm Street 3: Dream Warriors! This was the first of the Freddy pictures I saw in the theatre – I had to sneak in, of course, because after all I was too young! – and I really had a spectacular time at the movies that night!
For that reason, and not so much because the movie is actually all that great, I think very fondly of the third Elm Street installment! It’s certainly better than A Nightmare on Elm Street 2: Freddy’s Revenge, ha ha! It has a slick look, courtesy of DP Roy H. Wagner, that I consider the quintessential 80s horror cinematography! And it’s full to bursting with superb trick effects!
The story is pretty nonsensical though! It seems there is a group of youngsters living in a Bughouse For Troubled Teens because they’re all suffering from terrible nightmares of a hideous man in a striped sweater! Their doctor is Craig Wasson, from Ghost Story and Body Double, and, unsurprisingly, he’s no help at all! But with the arrival of a new psychiatrist, none other than Nancy from the first movie, there is finally some hope! They discover that Patricia Arquette, one of the troubled teens, has the special power of pulling people into her dreams when things get hairy! Ha ha, shades of Dreamscape, which Chuck Russell, the co-writer and director of this one, also had a hand in!
But in dreamsville this sorry lot all get superpowers for some reason, and that’s where the movie starts to get really silly! Ha ha, you expect a certain level of silly in these pictures, but there are subbasements of silly below that, grand levels of bushwa, that no grown man should have to tolerate! I’ll quote one line of dialogue, just to give you an idea: “In my dreams, I am the wizard master!” Yikes, ha ha!
But despite these magical dream warriors being part of the movie’s title, they actually don’t occupy much screen time, o blessed relief! It seems as though the filmmakers started to feel maybe a bit abashed at the nonsensicality of their motion picture, so pulled back from it a bit! Ha ha! But I’ll tell you this: they spared no effort in their trick effects! There some marvelous stop motion stuff – ha ha, they should still use that technique, because it looks great! – and of course plenty of tricky makeup! Some of the optical stuff is a bit fakey, but that’s okay!
The cast is an interesting one! Laurence Fishburne plays the orderly, and he’s solid as always; Jennifer Rubin, whom I’ve always liked, is one of the teens; and the guy who plays the big burly black teen, Kincaid, has the most non-threatening air about him you could imagine, though he’s supposed to be a tough young man! John Saxon returns, which is always nice to see! Craig Wasson is a strange case, because I’ve always felt there was a weird air about him! I know nothing about the man, but I have to say I just get a strange vibe! Maybe that just means he’s a really good actor, ha ha!
I’m sorry to say that I don’t think Nancy is a very good actor! She was a lot better in the first one, I thought! In this one – well, best not to look at it too closely! Ha ha, she was given a tough part to play (Doogie Howser meets Oliver Sacks, essentially!) and a lot of unspeakable dialogue, so it’s not all her fault! Anyway, she doesn’t ruin the movie, which is not scary or anything, but still sort of an enjoyable romp! I’m going to award it two popsicle stick houses!
Posted by Burl at 21:26