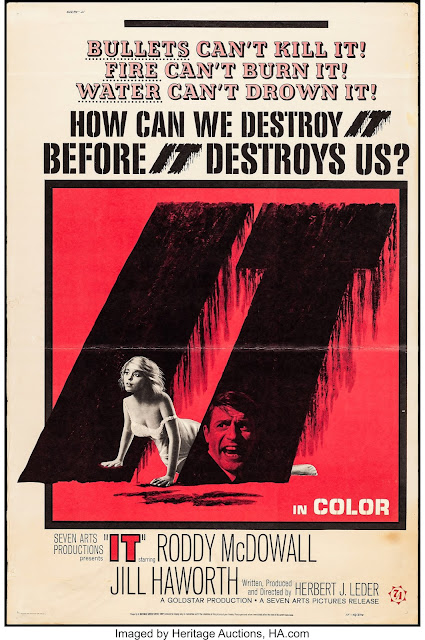 Addressing you from the Heights, it’s Burl, here with a tale of wild golemnry! Ha ha, surely you all know of the golem, that man of clay created to defend the Jewish peoples in the village! You’ve heard the legend, seen his adventures in that old cinema classic by Paul Wegener, The Golem, How He Came In To the World, probably even heard him referred to as “the Jewish Frankenstein!” Well sirs and madams, here we have a golem picture that has nothing to do with any of that, and it’s simply called It!

Ha ha, we begin with a warehouse fire in London, and this particular warehouse is filled with the overflow items from the local antiquities museum! The curator and his assistant, Pimm, played by Roddy McDowell from Fright Night and Heads, don’t seem too upset by it, but they’re fascinated to find one statue standing unscathed in the midst of the smoking rubble! It’s a humanoid thing that looks like a twisted old root with arms and legs, and Pimm and his boss identify it as a golem statue! But when Pimm turns his back for just a moment, the curator is fatally bonked by objet or objets d’art unknown! Did the statue perpetrate this senseless murder? 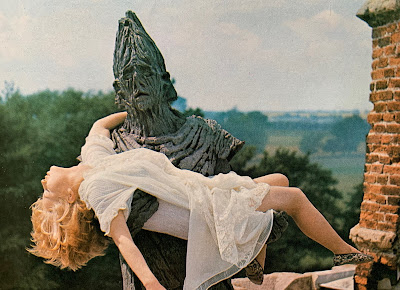 Ha ha, yes, of course he did! But Pimm so far has only suspicions, so the golem is trucked back to the museum, where, for the fussy little assistant curator, there is intrigue both of the workplace and romantic varieties! Pimm’s ambition is to become the head curator, of course, and he also has (rather unlikely) designs on Ellen, the dollybird daughter of the former curator! Ellen is played by Jill Haworth from Tower of Evil, and of course Pimm’s interest in her is not reciprocated - ha ha, that she addresses him only as “Pimm” the whole time ought to make this obvious!

But, as the revelation that he keeps his dead mother’s body in his flat, Psycho-style, makes abundantly clear, Pimm is no ordinary chap! The revelation not presented as much of a shocker though, and the dead mum has no bearing on the plot, so I suppose it's less a revelation than a quirky character note! Pimm’s twin ambitions are thwarted: career-wise by a nasty new curator played by Aubrey Richards from Endless Night, and romantically, not so much by Ellen’s indifference, which Pimm is too thick to register, but by the arrival of a manly American museumsman called Perkins, played by Paul Maxwell from The Haunting and Aliens and Indiana Jones and the Last Crusade!

In the midst of all this, Pimm discovers that the conehead of clay can be made operational by the simple application of a certain scroll, and that it will do his bidding! He has the golem put a bonking on the new curator and gets it to destroy a bridge to impress Ellen! Eventually, after some inner struggles with the ethics of it all, Pimm has the statue kidnap the object of his affections and take her to a country manor house! Perkins and two or three army guys camp themselves outside and shoot at the golem a few times, but, as the poster says and also a rabbi who pops in as the only actual Hebrew representative in the picture, nothing can destroy this crazy thing! The officials settle on the only sensible solution: drop a nuclear bomb on the manor house! Ha ha!

The picture seems like something Hammer put in the oven at the Bray Studios commissary and baked only halfway, and in this it reminded me very much of The Vulture! The script is an empty thing, providing no interesting backstory or cultural detail to the golem, and no dimension at all to the characters! McDowall, an actor I like, is in full fussbudget mode here, which I must say is not my favourite mode! The picture manages no affrights and is pretty silly overall, but it's a curio, and a curio has value to a reviewer like ol’ Burl! Plus the golem suit is good! So, ha ha, I give It! one and a half uneven umbrellas!