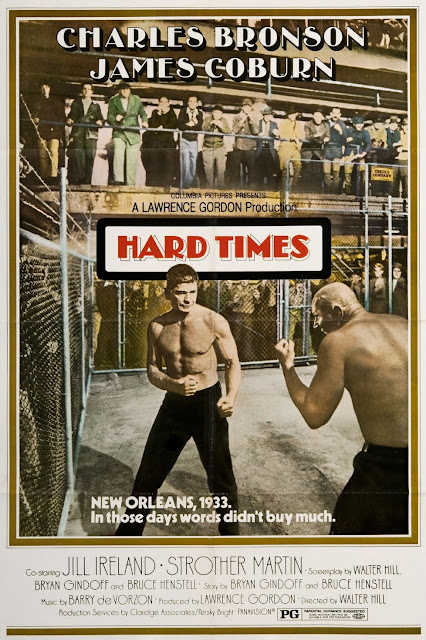 Ha ha, Hard Times yes indeed! We’re all having them! Yes, it’s Burl, here to review a fine picture from the beard of Walter Hill, and in fact Hard Times was his very first film as a director! You can see that plenty of his traits were in place from the start, for instance his Hawksian dudecentrisim, or his way of shooting action in short, sharp, tough little bursts! He kept going with a string of such pictures before diluting his reputation a bit with movies like Brewster’s Millions and, later, Supernova!

But getting down to cases! It’s the Dirty Thirties, and Charles Bronson of Mr. Majestyk fame is Chaney, a rail-riding hobo on the bum in the Big Easy! Of course he’s handy with his fists, and soon he’s hooked up with Mr. Patman himself, James Coburn, well known from High Risk and The President’s Analyst, in the role of a street fight manager called Speed! Along with a hophead medico played by the great Strother Martin from Nightwing and Pocket Money, they cause a ruckus in the Deep South punchfight industry!

Bronson’s opponents are played by the big-boned likes of Nick Dimitri from City Heat, Robert Tessier from The Sword and the Sorcerer (whose fighter shtick is that he keeps a delighted grin on his face throughout the punch-up), and Fred Lerner from Endangered Species; and Frank McRae from Vacation shows up swinging a sledgehammer! Ha ha, McRae is playing your basic thug here, but he manages in his short screen time to infuse his hammerman with a three-dimensional humanity - there’s a pro for you, ha ha!

There are ladies too, played by Jill Ireland from Death Wish II and many other Bronson pictures - she was Mrs. Bronson, after all! - and Margaret Blye from Mischief, and they are perfunctorily drawn in what would become part of the Walter Hill house style! But Hill does a terrific job in many other respects, pulling off a picture that seems very much a part of the wave of quality sweeping through film at the time! And it feels very much not a typical Bronson picture, and as much as I may enjoy many a Bronson picture, I call that an achievement to be proud of, particularly for a first-time director!

Bronson’s character isn’t much of one, though, outside of being very Bronson-esque! Coburn is always a treat, but here he’s frequently acting like a big smug jerk! And when it’s all over you realize there wasn’t much of a story, or too terrific an arc for the characters! Ha ha, it pretty much ends back where it started with not a lot to show for things aside from a few bare-knucklesmen laid out on the concrete! But the journey to nowhere is an enjoyable one! I give Hard Times two and a half giant playing card posters!