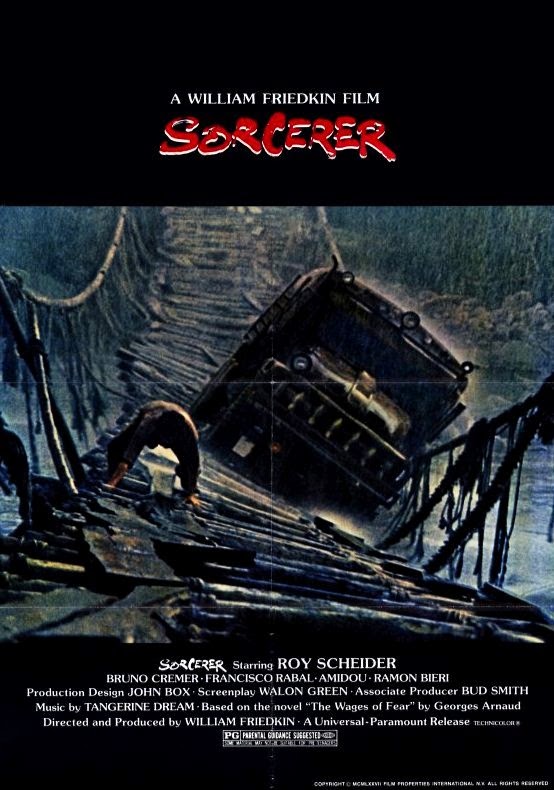 Careful… careful… careful… it’s Burl! Ha ha! Yes, today I’m reviewing a movie that will have you handling things very carefully for several days after watching it! It’s called Sorcerer, and it’s William “To Live And Die in L.A.” Friedkin’s remake of the Henri Georges Clouzot classic The Wages of Fear!
Now, if you’ve never seen The Wages of Fear, by garr, run out and find it! Great picture! It’s a classic, and a superior film to Sorcerer, but not by that much! I saw the Friedkin version years ago and liked it, but I was affected by the general impression that it was bad, so for years never made any effort to see it again! Until recently, ha ha! And let me tell you, I enjoyed it!
It’s really the type of picture that could only have been made in the 1970s and by someone coming off of two massive hits, which in Friedkin’s case were The French Connection and The Exorcist! And I do tend to like that sort of picture, the ones that beat the odds, that could not have been made but under extremely specific circumstances! As you all know, I also like fugitive expat pictures, movies in which a group of desperate strangers from around the globe are exiled in some dingy, purgatorial backwater! The Lost Continent was such a picture, in spirit at least, and this one is too, in spades! On top of this it’s a very manly picture, with lots of guys sweating and working hard and acting tough, and virtually no ladies to be seen! That it gets from Treasure of the Sierra Madre, a movie to which this one is certainly indebted!
You all know the story, ha ha, but it takes a while to get to! First we meet our characters: Roy “Jaws” Scheider is Jackie Scanlon, a functionary in the Irish mob fleeing from a New Jersey church heist gone wrong! Bruno Cremer plays Victor Manzon, an investment banker from Paris whose shady deal went just as wrong! Francisco Rabal, whom we know from Treasure of the Four Crowns, is Nilo, a hit man, whose latest hit doesn’t seem to have gone wrong, but from which he flees anyway! And Amidou, a one-name-only actor whom we know from Ronin, plays Kassem, a Palestinian whose Jerusalem bomb-blast plot very definitely goes wrong!
All of these fellows end up in some unnamed South American jungle town where an oil company is plying its trade! A well blows up and suddenly they need explosives to blast it out, but the only explosives around are dynamite sticks which have leaked and become terribly unstable! The slightest jolt can set it all off, ha ha! Why they can’t order some explosives in from somewhere else is a mystery, but the upshot is that these four desperate fellows must drive two big trucks many miles through the jungle to the well site, and they will be amply rewarded for their efforts—if they survive!
What follows is all sorts of sweaty suspense, with all of these fellows demonstrating what I assume are previously untapped wells of resourcefulness, mechanical knowledge and driving prowess! The cooler-looking of the two trucks is named ‘Sorcerer,’ so I guess that’s where the movie got its rather misleading title! (I think people back in the day were expecting another blood-and-thunder horror picture like The Exorcist, and when they heard it wasn’t that, they just went to see Star Wars again instead!)
But the movie’s great, and it gets as violent as any horror movie in parts! It looks marvelous of course, all electric jungle green and burnished charcoal grey, and the pillar of orange-red flame that is the oil well fire; and the supporting cast, all playing very realistically, includes ringers like Ramon Bieri from Grandview U.S.A. and Joe Spinell from The First Deadly Sin! The performers are terrific and Friedkin does a terrific job with the suspense and the physical details! (Pity about all that fake superimposed rain in the one scene, though, ha ha!)
There are some explosions and some gunshots, and a crazy scene on a lunar landscape, and it can’t wrap up without the most nihilistic 1970s ending since The Parallax View! All of it is scored with thumpy, frowny Tangerine Dream music, which really works for the picture! There might be better meditations on the caprices of fate out there, but Sorcerer is still utterly unique, which is high praise for a remake! I give it three and a half of the unluckiest blown tires in memory!
Posted by Burl at 21:31