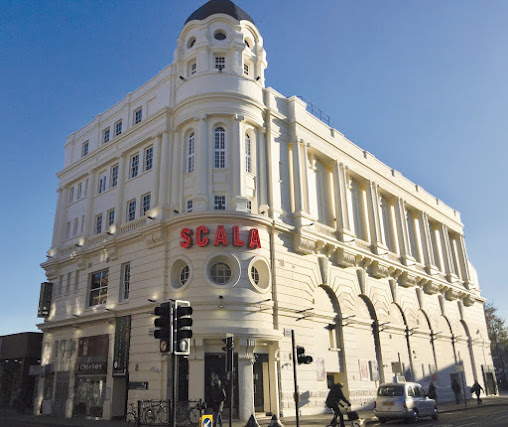 Taking your ticket, it’s Burl, here with a review of a movie not about movies, but about a movie theatre! I suppose that means it is about movies, ha ha, because a big old movie palace is still and always will be the best place to see one, and this movie is about just such a place! The movie palace in question is London’s late and much-lamented Scala Cinema, and the movie about it is simply called Scala!

Now, I’m no Londoner (ha ha, no, I’m not even British!), but I’ve spent plenty of time in that fine city, and when I was there for a spell in the late 1980s I discovered the Scala! And what a discovery it was! I recall seeing triple bills like Dr. Jekyll and Sister Hyde, Daughters of Darkness and Edge of Sanity, the one with Anthony Perkins! Or, on a different occasion, a De Palma triple-header of Blow Out, Body Double and Dressed to Kill! I saw Videodrome, Un Zoo la Nuit, Danger Diabolik, Barbarella, a trucker’s double-header of Wages of Fear and They Drive By Night, David Mamet’s House of Games and Things Change, and more! Every day the program changed and so every day there were more glorious movies to see, all of them projected on 35mm film, or at least high-quality 16mm, on a big ratty old screen! Oh, ha ha, it was the purest heaven to a fellow like ol’ Burl!

I remember it was a bit scary to go there, which was part of the appeal! You’d take the tube to King’s Cross, emerge into the rat’s nest of streets surrounding that station, and see, as in a vision, a white edifice rising like a massif down the way! Mods, rockers, punks, cinéastes, skids, students, seedcakes, sketchy people of all description with heads full of high fructose skunkfire, would gather to see the show, and none of them wanted any trouble so far as I could see! You could get some food, a beer or glass of wine if you liked, and the seat you settled into would be your own little campsite for the evening! Of course, as is noted by several interviewees in this thirty-minute documentary portrait of the place, the whole cinema rumbled with each passing tube train and the sound system was not exactly double-Dolby; but again, ha ha, all of this only added to the charm!

The movie about the Scala is not nearly so exciting as the actual place was, however! It’s mostly a parade of talking heads, with very little footage of the cinema itself, though I suppose there’s only so much mileage to be had from such B-roll imagery! More pep and wit in the editing would have gone a long mile, though, and if they could have managed some footage of a screening in progress, that might have been nice! There are some clips from at least three movies though: Evil Dead, Glen or Glenda and Mona Lisa, which are cut in for little or no reason!

I suppose these were available because their UK distributor, or producer in the case of Mona Lisa, was Palace Pictures, owned in part by Stephen Wooley, who was also a major player in the Scala and provides many interesting remarks in the doc! Also interviewed are a number of other Scala employees, including Jane Giles, who later made a book about the fabled movie palace! There’s also a great gallery of London eccentrics, including an old chap who offers tribute to his favourite cinema in the form of doggerel; an old lady who likes car chases and other action antics, but not so much “bedroom scenes;” the actor Ralph Brown from Alien 3 and Stoker, who does a bit in the voice of his character Danny from the marvelous Withnail and I; and a soft-spoken, utterly sincere gent whose film obsession is total!

The movie is a bit reminiscent of Out of Print, the tribute to the New Beverly Cinema in L.A., but is only about a third the length! This subject could have supported a feature too, but not necessarily in the style we get here - it would have to be much sharper and more energetic, I think! Still, a nice little portrait of a place close to my heart, and I was glad to discover it on the YouTube! I give Scala two soiled seats!