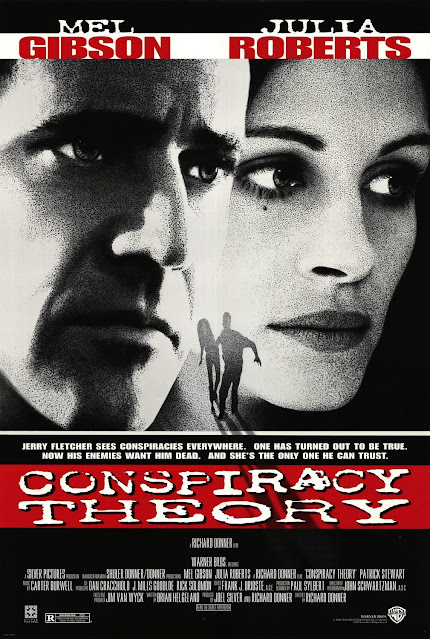 Hi there and hello, it’s Burl! Now, I’ll say this right off the bat: the movie I’m reviewing for you today is Conspiracy Theory, and the whole entire review could simply read “Ha ha! This is a terrible movie!” and that would be the end of it! But I feel I’d be betraying the Reviewer’s Code of Ethics if I did that! Mind you, I’ve done it before, in another persona as a paid movie reviewer, but now that I’m Burl, I’m really going to try to maintain some kind of standards here!

The fact remains that Conspiracy Theory is a terrible movie! I had some hopes for it back when I first saw it in 1997 - I can’t recall if I reviewed it then, but I’m pretty sure I saw it at some kind of preview screening, so I probably did! I do remember thinking it was a pretty sour fardel, and I think my hopes for it came from the fact that Richard Donner was still at that time considered a pretty solid action director, thanks to the Lethal Weapon pictures (even though each one was poorer than the last, ha ha!), and of course the picture was written by Brian Helgeland, who’d written A Nightmare on Elm Street 4: The Dream Master!

Plus the whole idea of a suspense/action picture revolving around conspiracy theories sounded like it had real possibilities, much as the idea of a horror movie based on urban legends sounded good! But, like Urban Legend, Conspiracy Theory doesn’t do much more than pay lip service to its titular phenomenon and then go its own way!

Mel Gibson from Mad Max Beyond Thunderdome plays a cabbie with a head full of skunkfire who jabbers endlessly to his passengers about this nutty theory or that one; meanwhile, he stalks and bothers Alice Sutton, a pretty woman who works in the Justice Department and who is played by Julia Roberts from Mystic Pizza and Ocean’s Eleven! He publishes a conspiracy newsletter with a circulation of five, and apparently one of the theories he’s published is real, and so a rogue government psychologist played by Patrick Stewart from Dune and Lifeforce kidnaps him to find out what he knows! But Gibson puts a nose-biting on him, and then the chase is on!

The chase stays on for the rest of the picture, but not in a way that offers blazing excitement to the viewer! Oh sure, Donner is a foursquare professional and knows very well what he’s doing, and so the picture is made with slick Hollywood aplomb! But all that aplomb is in the service of a movie that's little more than a sort of stalker fantasy-apologia!

There are a few appealing performances in the picture! Cylk Cozart, who played another federal agent in In the Line of Fire, is a personable FBI agent who keeps getting clonked on the head; Terry Alexander from Day of the Dead and The Horror Show is in there too, not doing his Jamaican accent; and of course we have Julia Roberts, who is not without her natural charms, but is cruising on autopilot here, as though she alone recognizes the true worth of the material! The central performance here is Gibson’s, and while I think we can all agree it’s highly annoying, it is uncontestably a performance, a skillful assemblage of jerks and pops and clicks housed in the skinsuit of a man with a head full of cracklin' bran topped by a black woolen toque! Of course, based on what we now know of Gibson, one must ask whether this was a performance or a rehearsal! Ha ha!

In conclusion, I can only say that Conspiracy Theory is a noisy, vacant thriller with some pizazz and wit, but not enough to offset the overlength, the irritating energy it radiates, and the vacuum at its core! I give the picture one wheelchair poking!

Email ThisBlogThis!Share to TwitterShare to FacebookShare to Pinterest
Labels: 1990s, action, NYC, romance, saw it on the big screen