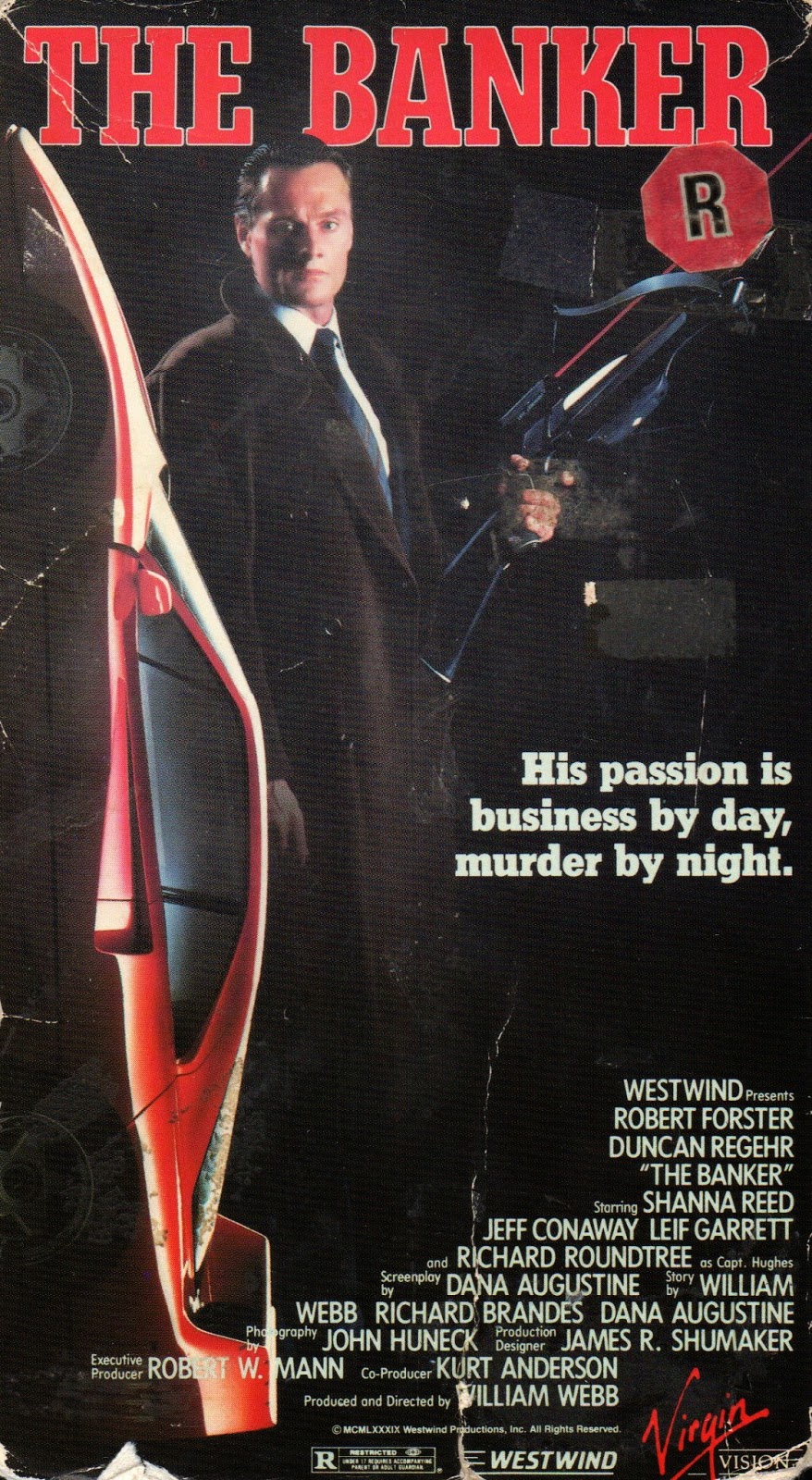 Hi, it’s Burl here with a review of a pretty goofy thriller! Ha ha, it’s called The Banker, and it’s about a killer investment banker who spends his days in the corner office and his nights all slicked up with facepaint and a crossbow, liquidating assets! Ha ha!
It’s a police procedural-meets-psychokiller picture, along the line of goofberries like Too Scared To Scream, Fear City and The First Power, with just a touch of Delirium! The banker of the title is a big muscleman guy, played by the dracula from The Monster Squad, who for some reason adopts a fake British accent when he’s on the prowl! When he gets the urge to kill, he calls up one or another of a pair of pimps (ha ha, one of them is played by none other than Leif “God’s Gun” Garrett!) and organizes the company of a lady, whom he then stalks and crossbow-hunts! After that he scrawls some symbols on the wall in blood, because he’s just that kind of guy!
Pretty soon the shout-happy police captain played by Richard “Maniac Cop” Roundtree – of course, who else, ha ha! – puts Detective Robert “Alligator” Forster on the case! Again, ha ha, who else? (Ha ha, Forester was a terrific guy, and he gave me a letter opener once!) The movie gets pretty repetitive at this point – it brings in a crusading news lady just as we saw in The Dark; and also the pimps get curious about what’s happening with their ladies; and there are many scenes where the banker’s secretary tries to prevent people from bursting into his office without an appointment! Ha ha, sadly we never get the scene where she is told her boss, to whom she has always been so loyal, is a crazyman killer!
Ha ha, any effectiveness this picture has comes from its extraordinarily hateful villain! If you thought you couldn’t dislike slick financial players any more than you already do, if the sight of Wall Street-style slicked-back hair makes you want to spit in it, or if you thought the fellow from American Psycho was just about as low as murderous yuppies could get, let me introduce you to this banker, Big Osborne! Ha ha, just wait until you hear his rationale for all the killings! But he deservedly gets a brutal sendoff, almost but not quite in the style of that mad axeman in Cobra!
Otherwise, the movie’s a pretty damp horseblanket! There’s little to no pep in the execution, and though the actors are mostly pretty game, they can’t do much with all the clichés they’ve been given! There’s an attempt at visual style, which is appreciated, but that’s fairly hackneyed too, I’m sorry to say! The picture comes from the same fellow who made the not-quite-a-movie California Girls, so it was actually a lot better than I expected it to be!
It tries, let’s put it that way! Exploitative elements are present and accounted for, the cast has a strong B picture flavor, and there’s a late-80s vibe that, if that’s the sort of thing you like, you’ll like a lot! But at the same time it should have been a lot better, or at least not such a flatty! I’ll give The Banker – boring title too, ha ha! – one and a half ill-fated ethnic partners!
Posted by Burl at 16:12