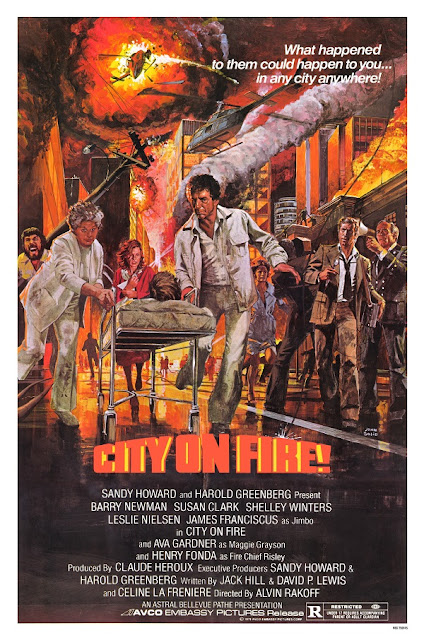 By the hearth, it’s Burl, here to bring you a simply disastrous review! Ha ha, well, I hope the review itself won’t be a disaster, but the movie sure is! This one came along at the very tail end of the great 70s disaster cycle, just before the twin hilarities of Airplane and When Time Ran Out pounded stakes through the heart of the genre, and I suppose you might accuse it, along with odourific contemporaries like Meteor, of contributing to the demise! The picture in question is none other than City on Fire!

It is of course the sort of movie that shows off the cast in little boxes to emphasize how special they are! The biggest boxhead of course is Mr. Henry Fonda, whom we know from On Golden Pond and Tentacles, and who plays Fire Chief Risley here, but of course there are others! Several of these are disaster veterans: we have Shelley Winters from The Visitor and The Mad Room, who appeared with Fonda in Tentacles and also swam her way through The Poseidon Adventure; here she plays a dedicated hospital nurse! Ava Gardner from Earthquake and The Sentinel is a sort of news anchor, or maybe more of a talk show host, ha ha, it’s hard to tell; either way, she’s a raging inebriate! We also get James Franciscus from When Time Ran Out, who is Gardner’s long-suffering producer!

In this ensemble cast, the default main character is probably a doctor played by Barry Newman from Vanishing Point and The Limey! But he doesn’t get much to do!  Susan Clark from Porky’s is in there as maybe Newman’s girlfriend, but definitely some kind of philanthropist donating money from her late husband’s estate to put a new wing on the hospital! Leslie Nielsen, perhaps best known for his horror roles in Prom Night and Creepshow, plays the mayor of the city (which goes unnamed but is clearly Montreal), who’s at the hospital for the new wing’s dedication ceremony! And aside from the boxheads in the cast there are plenty of familiar Canadian faces: people like Cec Linder from Explosion, Donald Pilon from The Pyx, and Jefferson Mappin from Incubus! 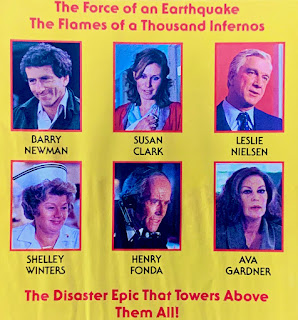 But what are the circumstances behind the citywide conflagration? It seems there’s a guy named Herman, played by Jonathan Welsh from Starship Invasions, who’s displeased with his employment situation and so goes on a sabotage rampage at the refinery conveniently located in the middle of town! Ha ha, and then he celebrates his accomplishment by purchasing a new suit! Next thing you know there are a few explosions and then an oft-repeated trick effect that looks like a leftover shot from Damnation Alley! This is supposed to represent the city being on fire, I suppose, but the bulk of the actual incendiary action takes place in and around the hospital! There are hardly as many stunts and burning things as you might find in an average episode of Emergency!

There is one full-body walking burn gag that’s pretty impressive, though, in the picture’s most harrowing moment! That’s when, eager to escape the hospital before the fire eats all the oxygen, a lady bolts from the premises before she can be sprayed by Leslie Nielsen or protected by the “water tunnel” planned by the fire brigade! She runs down the street but goes up in flame halfway there - but she keeps running! She doesn’t make it, however!

Most of the rest of the movie takes place on this one Sesame Street-style city block, with water spraying and dampened people running or being wheeled on gurneys! It’s not the most thrilling sequence ever committed to film, but at least it leads to the demise of the saboteur, resplendent in his newly purchased threads as a scaffolding falls on his head!

I can only speak plainly here: City on Fire is a bad movie! Neither the budget nor the skill required to pull it off was present during shooting, and nobody aside from Nielsen, who gets demoted from mayor to sprayboy, puts much effort in! There is a moral, however, just as in The Towering Inferno when Steve McQueen laments how much architects like to build tall towers with a tendency to inferno! City on Fire, for its part, concludes with Fonda shaking his head and murmuring: “It only takes one man to start a huge big fire!” I guess that’s true, chief! I give City on Fire one irritating newsman!