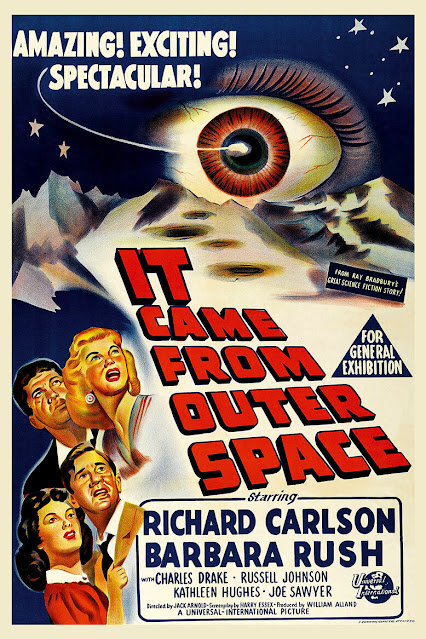 Ooo-wee-ooo, cried the theremin! Yes, it’s Burl with a 1950s sci-fi classic under review, and one from one of my favourite directors of that form, Jack Arnold! Mr. Arnold seems to have loved the desert, and as I don’t live anywhere near a desert, or at least not one of any size, my own love for the desert is really a proxy love, constructed and prosecuted not by me but by Arnold! That may seem a lot to lay on a talented director of monochromatic genre movies, but I think it’s so! At any rate, like Tarantula, this fits right into the beloved sub-sub-sub genre of Sci-Fi Movies By Jack Arnold That Are Set In A Desert, and the picture is It Came From Outer Space!

The story begins in a terrific little desert house that contains article-writer and amateur astronomer John Putnam, played by Richard Carlson from The Creature From the Black Lagoon and Hold That Ghost!, and his visiting girlfriend Ellen, as portrayed by Barbara Rush from Bigger Than Life and When Worlds Collide! Ha ha, they see a fiery object crash land out of the sky, and when they investigate, John observes a strange spherical ship embedded in the crater! There’s an open portal in the side, but as he approaches the door closes up, as though the inhabitants were saying “None for us today, thanks!” Then a big earthslide covers the orb!

Well, ha ha, nobody else has seen the thing but John, and most of the next hour of the picture is people doubting John’s story, scorning him as a publicity seeker, or just relentlessly making fun of him! He’s dismissed in the popular press as a crank or worse, and Sheriff Matt, the local law played by Charles Drake from My Brother’s Wedding, who already seems to have something against our overearnest hero, possibly fueled by romantic jealousy, almost considers him a threat to the town’s moral health!

Finally events take place which at least slightly mute the snarky comments and side-eye! An oddball creature with fish-vision floats about the desert kidnapping people and occasionally adopting their forms, as might the alien from The Thing! But fortunately these are not malevolent aliens, though they don’t hesitate to rattle their sabres a bit to make sure they get their way!

When two telephone linemen of Putnam’s acquaintance - a pair of mugs called Frank and George, played by Joe Sawyer from The Killing and Russell Johnson from Rock All Night - are snatched by the aliens, matters reach a boiling point! The sheriff has had enough, an anti-alien mob is formed, and things look dire for all concerned! Ha ha, I won’t give away the end, but those who like images of awestruck townsfolk won’t be disappointed!

It goes without saying that the desert atmosphere is great here, and represents a major part of my appreciation for the picture! I was less taken with the character of John Putnam, who seemed too often in the helpless thrall of his own urges and emotions! He’s one of those characters who never quite say what you want them to say, but don’t surprise you either! It’s a Ray Bradbury story, and his touch seems evident; that’s all to the good as well! It’s a minor key story, told well, very theremin-flavoured, steely black-and-white with the best desert atmosphere since Them! How can you go wrong? You can’t! Ha ha, I give It Came From Outer Space two and a half Joshua trees!
Posted by Burl at 19:28