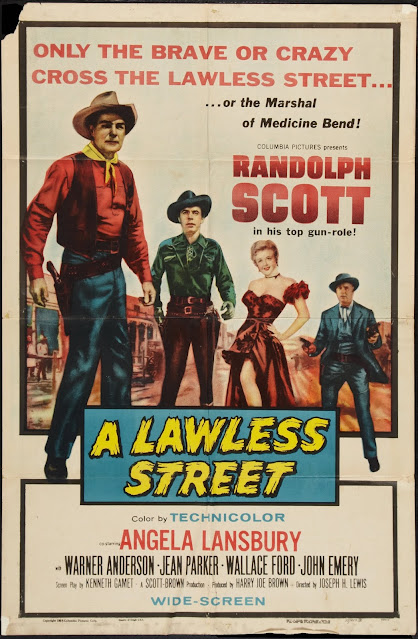 Boy howdy, it’s Burl, here to review a pistol-packin’ oater for you! This one features that cowboy non compare Randolph Scott, whose long career in Westerns ended with the great Ride the High Country! In today's duster he plays the legendary Marshal of Medicine Bend, and indeed the book the picture is based on was titled just that, The Marshal of Medicine Bend! But in its journey to the big screen, the title was changed to A Lawless Street!

Now, I’d seen A Lawless Street before, being as how it was made by a director I admire, Joseph H. Lewis! I watched it again the other day, having just found a used DVD of it, and afterward realized that I had the book around somewhere, so I found it and over the next day or so I read The Marshal of Medicine Bend! So I’m well steeped in this particular story at the moment, though there are still one or two things I can’t quite figure out about it, even after reading the book! I’ll get to that in a moment!

Scott plays Calem Ware, whose assiduous marshalry has helped the Colorado town of Medicine Bend on its way to peace and respectability and the sort of long life and steady growth that places like Dodge City, Deadwood, and Tombstone never got! He has a fearsome reputation as a gunfighter and is the sort of peacemaker who won’t hesitate to spill blood all over the floor! He doesn’t have many friends; his only buddies are the local doctor, played by Wallace Ford from Freaks, and his landlady, played by perennial fussbudget Ruth Donnelly, who of course appeared with Ford in Scatterbrain!

But trouble’s a-brewing in Medicine Bend! A local badman rides into town looking for trouble, but before he can gun down old Calem Ware (and he is old - in the book he’s thirty-six, but Scott here was pushing sixty!), the Marshal, draped in a sheet getting a shave in the barber’s chair, pulls a High Plains Drifter on him! There are more badmen where he came from, however, and it transpires that a pair of sharpies, played by Warner Anderson from Bad Bascomb and Week-End at the Waldorf, and John Emery from Spellbound and Rocketship X-M, are in some strange and ill-defined way hoping to take advantage of the town’s impending boom status by taking it over by killing the Marshall and keeping it lawless, and this in some way will hugely enrich them! Ha ha, I never did figure out the precise workings of their scheme, though it also involved terrorizing the local rich rancher, played by James Bell, who played doctors for Val Lewton in pictures like I Walked With a Zombie and The Leopard Man! Ha ha!

Calem Ware’s life is further complicated by the arrival in town of his estranged wife, a songbird played by Angela Lansbury, whom we know so well from The Manchurian Candidate, The Company of Wolves, and The Mirror Crack’d! She warbles a tune or two, but the reunion is fraught because she doesn’t want to be married to a man who might be killed at any moment! The risk of this worsens still when Calem first has to fight a scarred Mongo figure played by Don Megowan from The Werewolf and Truck Turner, and then must battle hatchet-faced gunman Harley Baskam, played by Michael Pate from Howling III! And let me tell you, it looks bad for Calem Ware!

A strange thing is that the characters say Calem Ware’s name over and over again: everybody from the landlady to the doctor to the bad guys and the hired guns and a widow played by Jeanette Nolan from The Manitou and Cloak & Dagger seem to want to say his name, usually in full, as many times as they can! Calem Ware, Calem Ware, Calem Ware! And yet the plot synopsis on the back of my DVD earnestly explains that the movie is about the tribulations of a Wild West Marshal by the name of “Coleen Wave!” Ha ha! How they got that one wrong, I do not know!

That aside, A Lawless Street is a strong little horse opera! It moves at a good pace, and Scott, despite being twenty years older than the character is meant to be, does his usual upright job; and the plot, no matter the confusion it invites, is compelling! And while we think of Joseph H. Lewis as an artiste du noir, with moody pictures like My Name is Julia Ross, The Big Combo, and of course Gun Crazy to his credit, he was originally a thoroughgoing oatsman! Ha ha, after all, he made The Man From Tumbleweeds! He did a terrific job here, anyway, and I very much enjoyed A Lawless Street! I give it three flaming tar barrels!
Posted by Burl at 13:59