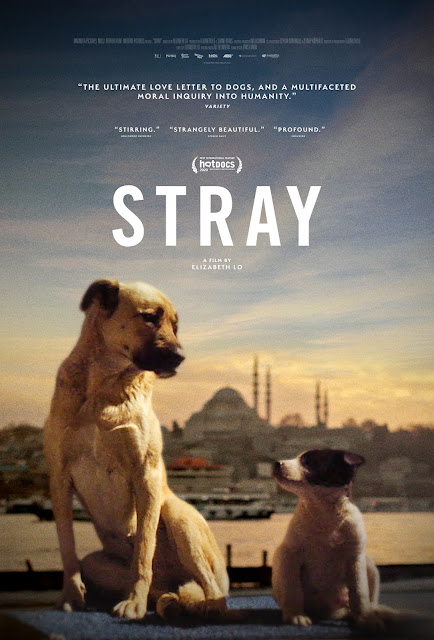 Woof woof, it’s Burl, gone to the dogs! I’m here to review a pooch picture that tells the true-life tail of bowsers on the streets of Istanbul and the people who love them: a new documentary by the name of Stray!

The picture mainly follows two four-footers as they travel the streets and harbor areas of this polyglot city on the border of Europe and Asia! West and East are the warp and weft of this town, and even in its less glamourous quarters, where these dogs and their human pals mostly roam, this unique admixture is evident!

The starring hounds are named Zeytin and Nazar, both bitches of indeterminate breed! They roam the town looking for chow, stare balefully around at the tourists, poop on the grass, lounge on the roadway, fight over meatbones, eavesdrop on couples at outdoor cafes, and spend time with some glue-huffing street kids from Syria! There’s a group of construction site security guards who treat the dogs more kindly than they do the kids - the homeless immigrants are kicked out of their construction site squat, while the bowsers are given heaping bowls of tasty slops!

In Istanbul, it seems, it has lately become illegal to put down street dogs, and so the people there have a unique relationship with the canines who roam the city! In their turn, the doggies don’t seem to have become the ravening killers we see in movies like Dogs or The Pack or Wolfen, but do their best to go about the business of survival with the least possible amount of fuss!

The camera spends a lot of time cruising around at the dogs’ level (there’s a lot of dog anus in this picture, ha ha!), and one must admire director/camerawoman Elizabeth Lo, whose lower back must have needed great slatherings of Rub A5-35 after each day’s shoot! The footage she shot has been assembled into a film that never really coalesces into a story, but manages something rarer and more nuanced! It exudes a spell that’s very minor, and which doesn’t stay with you long after the movie is over, but is quite enchanting while it lasts, particularly for dog lovers!

The more sentimental dog lovers may find the picture unsatisfactory for a different reason, though! The movie avoids both anthropomorphizing and over-romanticizing its canine characters - they’re simply animals in the world, and while their big brown eyes give them a soulful look, they’re not particularly cute or clever! I myself think this was the right approach, and it should go without saying that the lack of narration was also the correct choice here!

The picture is spotted with quotations from Ancient Greek philosophers, mostly the dog-loving Diogenes, but frankly they don’t add much to it! It’s not a movie that will live for a tremendous long time in my memory or my heart, but I admire it for its moxie, its technical acumen, and its intelligence! I give Stray two government ear tags!