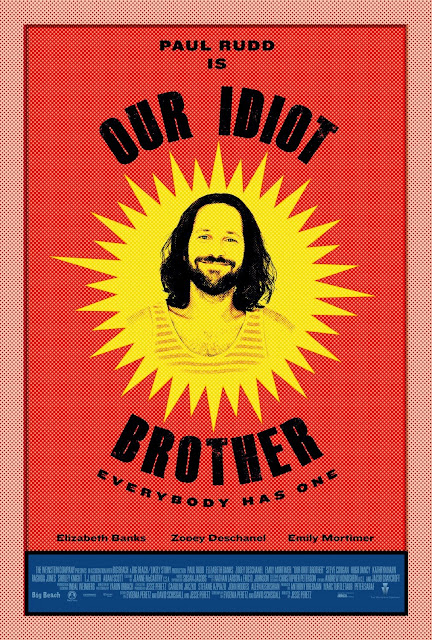 Ha ha, peace to all! It’s Burl here, to review a perfectly pleasant and generally unremarkable comedy! I guess I’ll have to find some remarks to make, though, if I’m going to review it, ha ha!
The picture is called Our Idiot Brother, and it features a big dogpile of comic actors dramatizing the story of a loveable beardo named Ned, who is selling vegetables one day when an underhanded cop baits him into what should be a perfectly innocent marijuana deal! Well, this leads to prison, and when he gets out there’s more bad news for this poor naïf! His loathsome girlfriend has hooked up with a new fellow, and also states that she is going to keep Ned’s beloved dog, Willie Nelson!
From there it’s to the big city, where Ned couchsurfs between the homes of his three sisters and gets into trouble! His guilelessness roils their lives in predictable ways, and they react by becoming less and less likeable! Ha ha, at times you think to yourself “Hey, maybe they’re right – maybe this guy is a terminal bonehead!” But then along comes a scene where he expands upon his worldview, and it makes a certain sense! By the end, all loose ends have pretty much been tied up in a cheerfully tidy way, and you think to yourself “Ha ha, I certainly seem to have just finished watching  a movie, all right!”
With its mellow, weed-smoking protagonist, its low-stakes tone and its NYC backdrop, this is a very similar picture to Jack Goes Boating! That one was more of a drama though, and this one is, or tries to be, more of a comedy! It has some amusing moments, certainly, and I’ve never been one who insists that his comedies be laff-riots anyway! So I didn’t mind, and I will say that the genial and peaceable atmosphere tickled my fancy!
For a movie where not that much happens in narrative terms, it’s also pretty fast-paced! It’s been cut to the very bone, adhering quite admirably to the “enter late, exit early” school of storytelling! It didn’t spell everything out – well, plot- and character-wise anyway; but morality-wise is a different story! Ha ha, They certainly don’t want you leaving without having learned that innocence is a vital part of the well-lived life!
Paul Rudd from Halloween: The Curse of Michael Myers plays Ned, and he does a very good job of it, with plenty of easy-going charm emanating from within his big beard! There are a couple of other likeable characters (namely a neighbour of one of the sisters, the girlfriend of another, and the child of a third, played by Emily “Harry Brown” Mortimer), but just about everyone else is a pretty wet hen! Steve “The Trip” Coogan plays an especially nasty galloper! But still, everyone does a solid job, and the movie in general is a competent piece of craftsmanship!
It doesn’t say or do much in the end though, and is pretty simple-minded! I enjoyed it while it was on, and under the right circumstances you might too! I’m going to give Our Idiot Brother two and a half bonus stalks of rhubarb!
Posted by Burl at 12:38