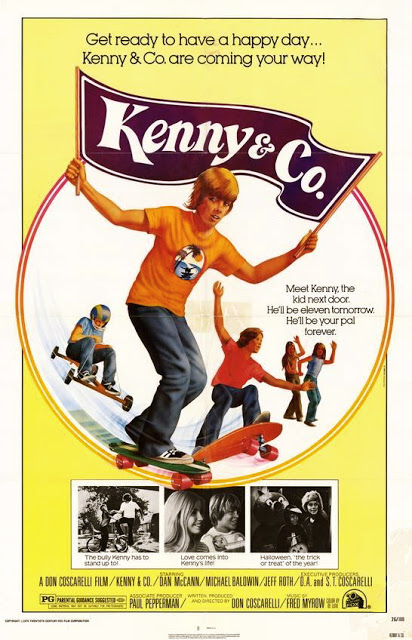 Hello gumchewers, it’s Burl, here to review a family film from Don Coscarelli, the director of Phantasm! Yes, that’s right, a family film, but one with some pretty heavy Halloween themes, so rest assured it’s entirely apropos for this time of the year! The picture is a nice little bibendum by the name of Kenny & Company!

It’s a slice-o’-life story following twelve year-old Kenny, and his friends, enemies, and family, through a few weeks in the fall of 1975 or so! Ha ha! He lives somewhere near Los Angeles, so there’s not much in the way of autumnal atmosphere on display, but there’s a heavy emphasis on the approaching kidstravaganza of Halloween! We see Kenny at play, nearly messing up a football game by running the wrong way before his best buddy Doug sets him aright; we see him at school, where he interacts with a cool teacher played by Reggie Bannister, that Coscarelli mainstay we know so well from Phantasm II; we see him at home, with parents that are decent but sometimes annoy him or give him bad advice!

Mostly we see him hanging out with his pal Doug, played by the kid who was Mike in Phantasm! They skateboard, ride in their go-kart, pull pranks (including one cruel jest in which they fool the annoying kid across the street into snapping his fingers in a mousetrap) and generally behave much in the manner I recollect from my own days as a 70s youth! Ha ha, Kenny’s a fair bit older than I was at that time, but I still have some groovy memories from those pointy-lapelled days of yore! Much of the picture chronicles Kenny’s battle with a truly imposing bully called Johnny Hoffman, and his creepy little sidekick Pudwell (who is played by one of the kids from the same year's Grizzly, ha ha)!

But the shadow of Johnny Hoffman, large as it is, does not loom over the whole of Kenny & Company! It’s mostly blissfully nostalgic goings-on steeped in a heavy, all-natural 70s atmosphere - a Richard Linklater movie for the pre-teen set! Ha ha, Coscarelli probably wasn’t thinking about making a glorious time capsule when he made this picture, but just look at the clothes, the bikes, the cars in the background! Look at what Kenny and Doug do for fun, double skateboarding in a manner that today would have them on the evening news and then arrested! One of them even skates through a pile of flaming debris, and of course they also ride around in the back of a pickup truck!

We see Kenny daring to hold the hand of a girl he likes! And we see him visit the local muscleman! And of course in art class, Doug pulls the old trick of sculpting a hollow ball that will blow up in the kiln and destroy everybody else’s work! Ha ha, someone did this very trick in my art class back in grade 7! And then there’s Doug’s dad, a big, red-faced cop with a keen sense of humour, whose favourite gag is to lock people up with his handcuffs and then pretend he left the key at the office! It’s all perfectly wonderful, just a blissful good time at the movies! Even the many scenes of Kenny wrestling with his own mortality - a theme not unexpected if you’ve seen Phantasm - don’t harsh the buzz!

I guess I was in just the right frame of mind for this movie, and with the right company when I watched it, because I really loved it! Sure it’s shapeless and not terribly slick, and potentially boring to those who can’t find any entry point into its magical world! But I was with it from the start, and let me tell you, it’s worth a watch! It’s easily found on the internet for free, so go forth and step into the little time machine that is Kenny & Company, a film to which I bequeath three Pudwells! Ha ha!