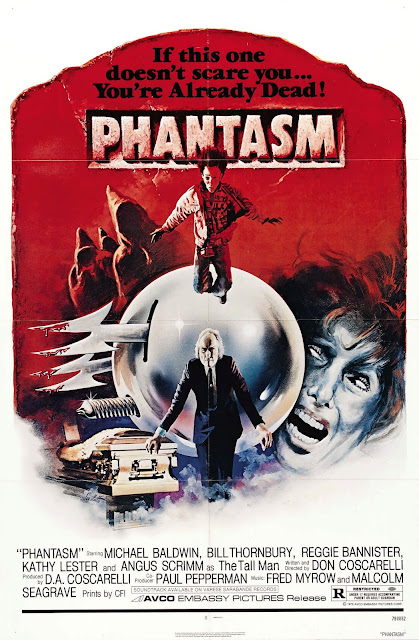 BURRRRRRL! Ha ha, no, it’s not the Tall Man, it’s me, Burl, reviewing the very first of the Phantasm pictures, which is to say Phantasm! Now, I’ve seen the picture a time or two, and I’m pretty sure I saw it back in the old days of VHS, but somehow it never really spoke to me! I liked it passably well, sure, but never concentrated on the movie hard enough to buy into the dream logic frequency it operates on! It wasn’t until Phantasm II came out in 1988, and I went to see it in the theatre, that I really began to appreciate the demento imagination behind these pictures!

Of course we know the story of Phantasm, or what passes for a story! In a small town (which is, like Haddonfield, really just cobbled together from a bunch of L.A.-adjacent locations), a teenage orphan called Mike notices strange goings-on around the local funeral home! His older brother’s buddy has just been killed, and a weird, towering, almost psychotically stern-looking undertaker is hefting coffins around like they were empty cardboard boxes, and robed dwarves are running around and then there’s that severed finger bleeding mustard, the enormous housefly, and the silver flying ball that spikes itself into people’s foreheads and drains their blood as though through a firehose! And don’t forget the tuning forks that lead to another dimension!

Ha ha, it sounds like I’m describing a weird nightmare, doesn’t it! That’s exactly the appeal of Phantasm; well, that and the hardcore 1970s After School Special atmosphere it possesses! Actually, maybe the combination of crazy metaphysical supernatural sci-fi horror and Brady Bunch melodrama is what makes the thing work the way it does! Add to that the frowny Tall Man, played by good old Angus Scrimm from Chopping Mall, and the mellow balding ponytailed hipster-jester sidekick ice cream man buddy Reggie, and an unforgettably boss HemiCuda, and you’ve got a mighty groovy concoction!

The acting is all over the place, but every performance, however raggedy, is exactly what the picture requires! Michael Baldwin from Kenny & Company is fine as Mike, and Bill Thornbury from Summer School Teachers does what he needs to do as Jody, the older brother! Scrimm and Reggie Bannister, playing Reggie of course, are even better! The picture could use a strong female character or two, but I guess you can’t have everything!

It’s a special little movie, very 1970s, very nonsensical, and quite unique! As much as I like Phantasm II, I almost wish this original movie was a standalone phenomenon! (Ha ha, the subsequent sequels have some pleasures to offer I suppose, but in the end are pretty forgettable! At least, I’ve pretty much forgotten them!) I guess it’s not for everyone, but those who like weirdness and 1970s So-Cal blow-dry madness will find a lot to appreciate! I give this crazy movie Phantasm three giant flies in the garbarator!