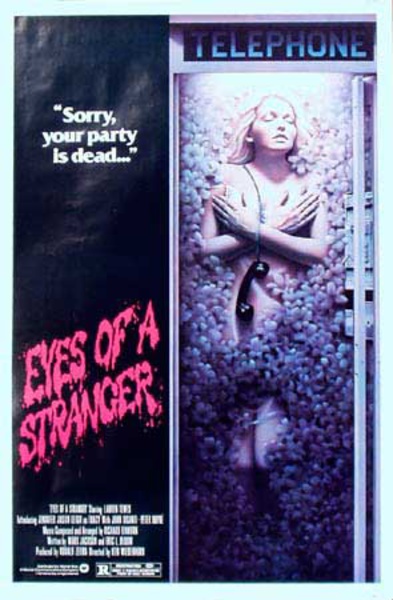 Hello, Burl here! It’s my duty today to review a slasher picture, but one that’s particularly unpleasant because he’s a rapist too! The fact that it leans in a little more to a Special Makeup Effects-type of slashing than one expects (or not: the Special Makeup Effects in question are by Tom Savini) only mitigates this unpleasantness a little bit! Anyway, the movie is Eyes of a Stranger, made in Florida by the same guys who made King Frat!

Later on the same fellow, Ken Wiederhorn, directed Return of the Living Dead II, which at least was slicker than this one! Eyes of a Stranger brings us a tubby, spectacled sex maniac played by John DiSanti from For Keeps! Ha ha, the filmmakers gave him the most boring-guy name they could think of, which is “Stanley Herbert!” He’s the sort of übercreep who follows women around, leering and licking his lips, makes some horrible phone calls to them, then busts into their homes and rapes and murders them! He’s a really terrible guy, and sometimes you only keep watching the movie to see him take some punishment! Which, ha ha, he finally does, later!

Our hero is Jane Harris, the sort of local newslady who’s not afraid to go off script and tell it like it is! She’s played by Lauren Tewes from the good old Love Boat, but not doing much cruise direction here! Naturally the assault killings have her upset, and imagine her surprise on discovering that the maniac lives in her own building complex! She has a Harold Ramis-y lawyer boyfriend who doesn’t believe anything she says, and whom I thought I remembered being on the receiving end of a sound poking through the head, but it turns out I was thinking of a different Savini-ganza, The Prowler!

More important by far than the boyfriend is Jane’s little sister, who, years earlier, had been abducted by a different creep and rendered psychosomatically deaf and blind from the experience! She’s played by Jennifer Jason Leigh of Single White Female and Grandview U.S.A., and of course Backdraft, and she pulls off the blind and deaf stuff quite well, in spite of some of the things she’s asked to do! Ha ha, it’s not her fault, after all, that a neuropathologically dubious turn of events at the climax will stretch the suspension bridge of disbelief with the force of a Godzilla!

There are some quite effective suspense sequences in the movie, though not so good as they might have been, perhaps; and there are also some outright missed opportunities! The slasher aspect is present, though sometimes seems a bit shoehorned in - according to Savini, the extra tomato paste was called for only later in production, after the producers noticed how well their previous film Friday the 13th was doing! And so the makeup man provided a head chopping, a knife poking and a couple of juicy gunshots, which were then of course themselves quite badly chopped by censors! Ha ha, oh well!

It’s not a good picture, though it has moments, and it certainly has a hateful villain whose comeuppance you await eagerly! I liked the twin apartment tower thing, but they could have done a lot more with it methinks! It’s no classic, and I suppose I’ll give Eyes of a Stranger one and a half Dawn of the Dead posters!